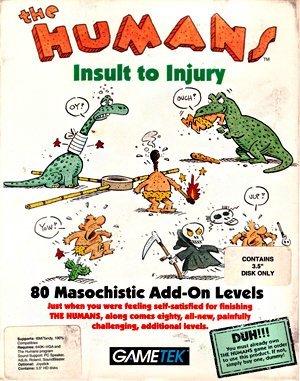 The Humans: Insult to Injury

Available in both stand-alone and add-on forms, The Jurassic Levels is presumably named to cash in on the then-current Jurassic Park hype. It contains 80 additional levels for the Lemmings-influenced puzzler Evolution: Dino Dudes (known as The Humans in the UK). Play The Humans: Insult to Injury online!

The objects collected during the first game are available from the start, so puzzles are immediately more complex.

Wizardry: The Return of Werdna