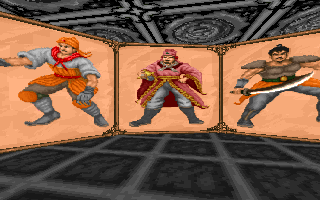 The Legend of the Seven Paladins 3D

In 1994, The Legend of the Seven Paladins 3D was released by Accend Inc. with a very interesting Shooter. This you can now play online.

The Legend of the Seven Paladins 3D description

Taiwanese (!) FPS based on Build engine and legends of Shaolin. Here.

Modern resident of modern China fails in the distant past, taking the place of one of the seven great Shaolin warriors (which we even choose to give!) in the complex maze of political intrigue over the seizure of the throne of the great Chinese Empire. Here.

The game is based on a very early version of the Build - in fact, even TekWar, the first full commercial game using this engine, uses later; even the public beta LameDuke uses later... well, you understand. It gives her, on the one hand, the ability to call the first game to Build, and with another - to show us how far from zero gone the same LameDuke.

The graphics are quite unexpected from the engine, except that the opposition is not too well animated, but the ceilings so low in places that evoke a sad Association with Wolfenstein 3D. The sound is adequate visuals, the music hole-ethnic, rather than pleasantly warms the soul, given the ambient tradition of the soundtracks to all the other games on the Build. Menu and all the text in the game is in Chinese, but in sexysamira FPS text is particularly important is not important.

Notably made starting a new game - the hero passes through the hall, the walls of which hang portraits of Salinized, whose place he might take. Each of them put your Arsenal of weapons, so the choice is quite important. And then we get into the "gun" room, which actually has a choice of difficulty in the game is the knife, sword and TELECIDE are meant to symbolize, you know, Easy, Normal and Hard. Prikolnenko.

The igroprotsess traditional through - first, we put three types of weapons - a sword, throwing something and magic. Some time will have to get used to the fact that instead of numbers we are dealing with bars - one on life, the second on cartridges - as to what kind of weapon icon on the dashboard mean, as a real weapon-visible-from-first-person appears only on promotional screenshots of the game. Alas.

The fate of the game was difficult - the new schedule is a legitimate way, but the money paid, so when the game has been completed yet, the release of it broke very prosaic reasons. A valiant Chinese pirates stole and then posted into the public domain. To the Western viewer it made it much more later... Now she can see you.

Want to play The Legend of the Seven Paladins 3D online now, play it on your browser here.