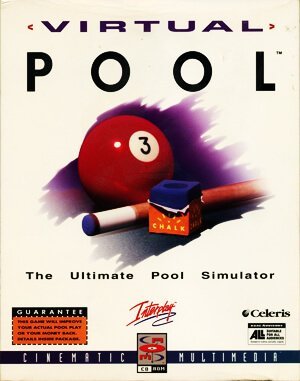 Click here to play Virtual Pool online
5.0 /5
Virtual Pool is an accurate simulation of straight pool, eight-ball, nine-ball, and rotation pool. The game is viewed in first-person 3D perspective, in contrast to most earlier pool games which featured a fixed overhead view.

Virtual Pool is a 3D, first-person sports simulation video game released by Interplay Entertainment in 1995. It is the first of the “Virtual Pool” franchise of computer simulations of pool (pocket billiards) games developed by Celeris. Play Virtual Pool online!

Virtual Pool is the definitive pool simulation game that actually teaches novice players how to play and even promises to improve the game of the pool shark. Developed by a team of physicists and professional pool players, Virtual Pool brings the game to life with the highest degree of accuracy. Balls roll, skid, collide and move on a fully rendered 3D controlled pool table that mirrors reality.

Virtual Pool has revolutionary features that allow players to actually ‘walk’ around the table to check out their next shot, take a closer look, back away, look left or right and then line-up the shot like they would in a real game with a real table. This title also allows players to take an overhead view from above, something unavailable in a real pool game!

Taking game tips from World Champion pool player “Machine Gun” Lou Butera is guaranteed to improve the player’s game. “Machine Gun” Lou will teach players over 30 famous trick shots the player can practice on their computer screen and then implement on a real table.

You can play Virtual Pool online here, in web browser for free!