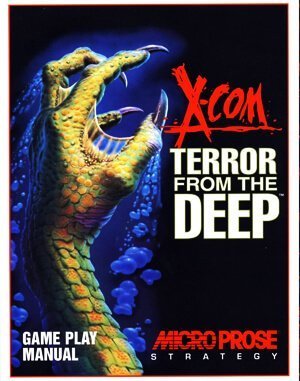 X-COM: Terror from the Deep

Click here to play X-COM: Terror from the Deep online
4.3 /5
Terror from the Deep is set in 2040, four decades after the events of Enemy Unknown. Following the destruction of the alien Brain on Cydonia, a transmitter remained active there which awakened a group of aliens under the Earth's seas who had lain dormant for millions of years.

X-COM: Terror from the Deep is the follow-up to the resource management and tactical combat game X-COM: Enemy Unknown.

It has been 40 years since X-COM last defeated the aliens. Now, in the year of 2040, aliens begin to appear on the Earth again. This time the threat to humanity is coming from the depths of oceans.

After awakening, the aliens proceed to terrorize seagoing vessels and port cities, kidnapping humans to perform bizarre genetic experiments on them. X-COM, which had been disbanded after the first alien war, is revived by the Earth’s governments to fight this new menace as the aliens’ ultimate goal is to reawaken their supreme leader, a being that cannot be stopped once revived.

The game is almost identical to the original X-COM game. The user interface, weapons, and aliens are all the same. The only difference is the adaptation of the aliens and weapons (e.g. new hand-to-hand weapons) to the ocean environment. The game features both undersea and on-land missions, and is significantly harder than its predecessor.

You can play X-COM: Terror from the Deep online here, in web browser for free!