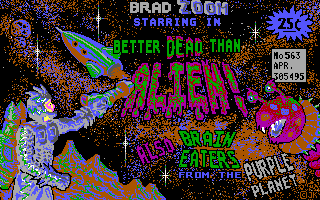 Meaning: first, we run standing at the bottom of the screen with a gun and shoot down on top of hordes of aliens, you can move left, right, and up and down. Aliens has several kinds, they differ among themselves not only in appearance but also the speed of "falling".

Then there will be other levels, in the style of Asteroids - in fact, a simple space flying, but difficult – not least due to the fact that we have only one life. The aliens here is all of the same type (pretty interesting green-eyed creature, by the way), after the destruction of them drop various bonuses, mostly weapons, shields and bombs. On some screens instead of enemies we were waiting for the bosses.

Graphics, shall we say, very average and dark, as the game itself, she is curious and sweet, but nothing really remarkable in it, so it is recommended that only the biggest fans of such entertainment, wishing to learn as much as possible similar games.

Enjoy playing Better Dead Than Alien! online, it can be played on your browser and is free.