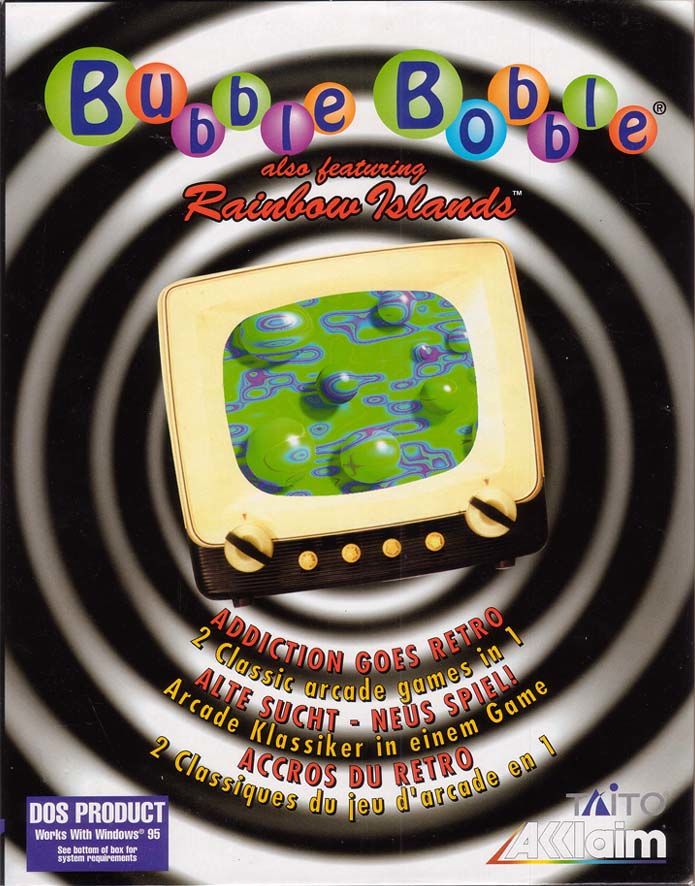 Bubble Bobble - the description of this game you can read on this page; it is worth noting that in this collection improved graphics.

For the first time the game was released in 1987 on the arcade and became a hit, the result of which has been ported on almost all known platforms, however, as usual, PC users saw it only after 9 years.

Since Rainbow Islands is a sequel of game Bubble Bubble (full name - Rainbow Islands: The Story of Bubble Bobble 2), and the main characters remained the same: to take Bublin and Boblin. If you remember, at the end of Bubble Bobble, after defeating Baron von Bulba, the twins find their human form, so in the sequel you will play people.

New brothers is the release of rainbow Islands from the villain named "Dark Shadow". Only in the game seven Islands, each of them has a separate subject (insects, military vehicles, corpses, etc.) and four stages, and at the end of the fourth boss is waiting for. Each stage consists of many platforms on which you need to move vertically when he reached the top, and to do so quickly, as the bottom rises constantly water.

Gemini is able to produce a rainbow, which can be used as weapons and for building platforms. The hero can run on the rainbow, but when you jump on it, it collapses and can also kill the enemy. Around the level of scattered items giving points, and various bonuses (in addition, they can knock out the opponents), increasing the number of arches in the rainbow, this speeds it to speed of the player etc. the game Also has several secret Islands to get to them, you need to collect colored crystals, to clear which can create a rainbow on opponents. Unfortunately, despite the inscription "2P" on the title screen of the game, the two players can only play in turn.

That game came out on PC only 9 years later, there is one definite plus is the graphics: the graphics are not worse than in the version for Amiga (and the enchanced version is even better).

Can recommend the game to all fans of classic arcade games.And see it is only all - as one of the most popular arcade games.