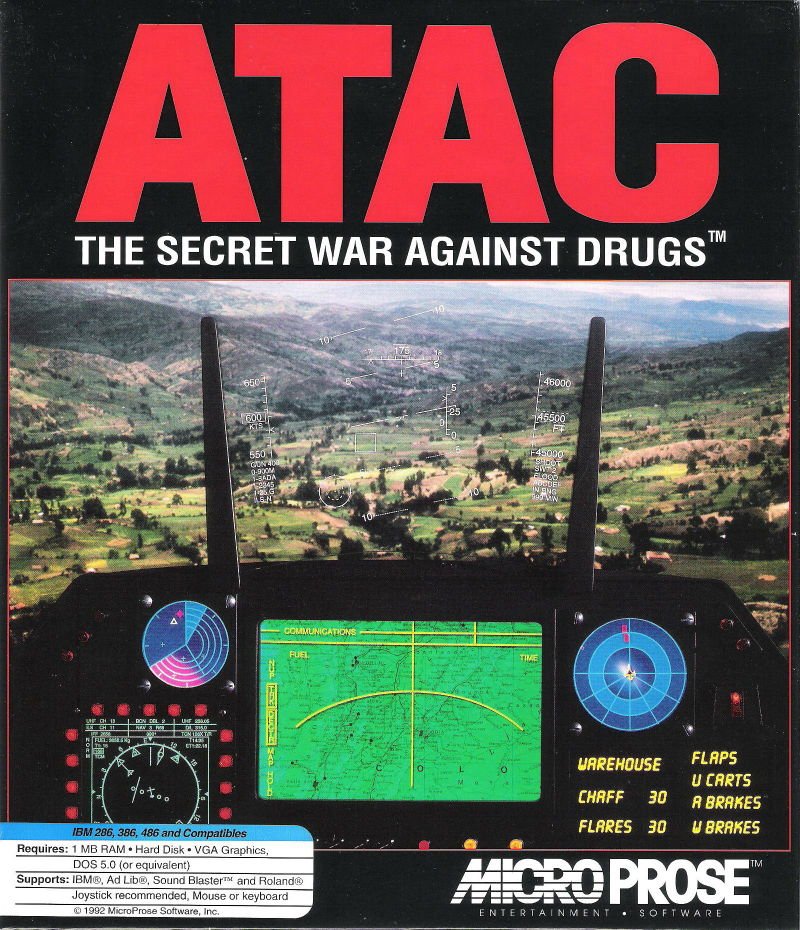 Talented and creative developer Argonaut Software Ltd. released ATAC: The Secret War Against Drugs in the year 1992. The game was new, challenging and very engaging. Play it again online here.

Curious simulator with elements of strategy (!), where it is possible to control both the plane and helicopter. The game's plot – the fight with absolutely brazen Colombian mafia with the help of latest technology (which, in fact, are the data plane and helicopter).

There are three levels of difficulty – Air Strike (here there is virtually no strategic elements, we're fighting alone), Limited Campaign and Full Campaign. If you choose the first level, we immediately choose a vehicle: either aircraft (F-22 "Jet"), or helicopter (AH-64). If you select the second or third levels, we will have more partners (two or three) that you want to select from the list. Also before the start sets some parameters of realism (for example, control sensitivity and detail areas).

On the second and third difficulty levels the game actually has two modes: strategic (albeit very conditional) and simulator. In the first one you need to read the intelligence reports (which includes CIA agents and local rebels) on the movement of convoys of trucks carrying drugs (these convoys is one of your main goals in the game) and the enemy planes protecting the convoys and the location of enemy bases-factories for the production of cocaine. Here you can order the collection of such information in a particular area or "order" reconnaissance flight to detect the base, look at the map of the tactical situation, edit the points of the future of flight. Interestingly, the intelligence reports can be read in full and in summary form, the tactical situation map (actually a map of the whole Colombia) can be viewed in different scale, and the editing points of flight can be pre-set altitude, time, radius of impact area and used weapons on each point.

The second mode is, of course, is a real simulator with first person view. Please note that you have in the game too base that the enemies are actively searching and want to destroy, therefore, in addition to attacks on their bases and convoys, and air battles will have to protect it. There is also a civilians, to shoot at which is highly undesirable (if you kill too many civilians the game will end). The enemy planes are displayed in red, important objects of the mission blue, other ground targets green.

Management, of course, far from the arcade, but still much easier than most other simulators. As for the graphics – can be, in particular aspects of the design of the area it's a little weak, but considering the year of release and genre – it is simply gorgeous; moreover, you can even say that this is one of the most beautiful simulators.

Verdict – a very interesting, well thought out and not very difficult in terms of mastering the controls of the game, which may be of interest to fans of old games.

Tired of your same old routine, want to add some entertainment and fun element in hour life? Play one of the best videogame ATAC: The Secret War Against Drugs online now and change your boring oold routine for good.