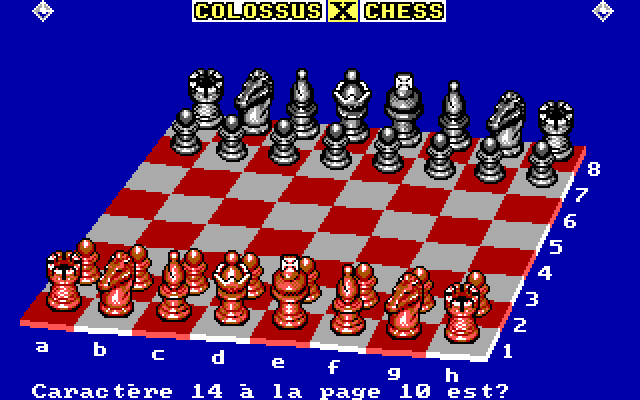 Colossus Chess X is a Tabletop game released by CDS Software in 1990. It is an interesting DOS game and a must play for all old videogame lovers.

The first part of a series of chess simulators Martin Brienne, released for 16-bit platforms.

The main feature - the ability to choose not only between the traditional for those years and a two-dimensional pseudo-isometric view of the Board and pieces, but the appearance of the figures themselves: they can be as traditional chess, and is decorated in a medieval, middle Eastern or sci-Fi style. Graphics (supports CGA and EGA) in the isometric mode is pretty good, the movements of pieces are animated in both the visual options. There are different modes of gameplay, including time, there is also a demo mode. Present and a very broad base of parties.

Any differences from the classic chess in terms of no rules, the level of artificial intelligence - above average for those years, which allowed the game to get a good reputation. Today, it is largely of historical interest as the old chess with beautiful graphics.