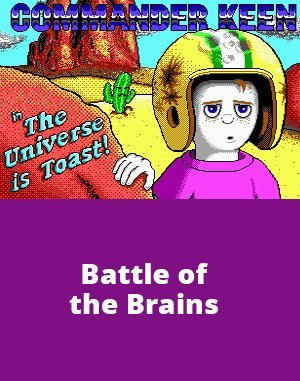 Commander Keen 9: Battle of the Brains

Click here to play Commander Keen 9: Battle of the Brains online
3.2 /5
An exciting adventure in the parallel universe!

Battle of the Brains, also known as Keen 9, is the third and final episode of the unofficial “The Universe is Toast” trilogy by Ceilick, with the bulk of the modding done by Ceilick, Mink and Tulip, with extensive patching by Levellass and Lemm. Work on the mod began shortly after the release of Dead in the Desert in 2009. It was released in February 2011. Play Commander Keen 9: Battle of the Brains online!

The story continues where Dead in the Desert left off. After escaping the planet Calidune and being reuinted with his friends in the Bean-with-Bacon Megarocket, Commander Keen learns of Mortimer McMire’s plans to destroy a giant star and incinerating the universe. He also learns that Mortimer has a space station containing several transporters which can be used to teleport to distant worlds and locations. One of these transporters is heavily guarded and believed to lead to Mortimer himself. Keen must travel to four different worlds in order to activate the controls which unlock the doors to the final teleporter so that he can stop Mortimer before the universe is toast!

You can play Commander Keen 9: Battle of the Brains online here, in web browser for free!