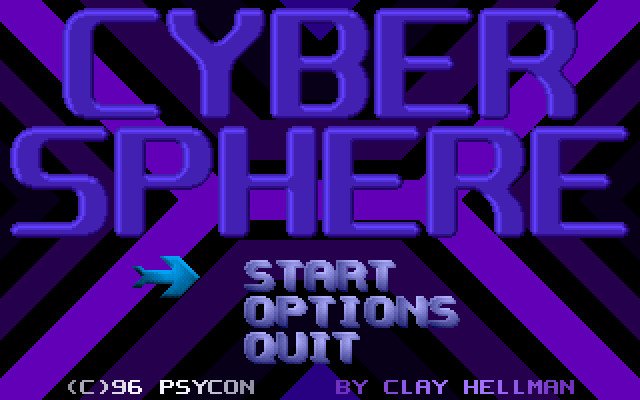 Extremely little-known arkanoid ported in 1996 to the PC from the Amiga platform where he was released two years earlier; the game in both versions does not appear in any large database in PC/Amiga/games in General.

What is the breakout likely to imagine things. At the bottom of the screen, moving left and right platform and the Bouncing of her ball at the top few rows of blocks that the ball must break and most of which are hidden bonuses of varying degrees of usefulness (some blocks can be destroyed only after several hits); as soon as broken all – the level is passed. Naturally, with such uniformity exciting new breakout game to those who played in "the first sample" can only be due to a variety of bonuses and unusual graphics. And I must admit that in the Cybersphere with the over-abundance of both.

Bonuses might not be able to name some quite unique because almost all of them have been seen in other older similar games, but still they are really a lot, and one transfer is breathtaking... Additional platform or even the second or third (!!!) the balls on time, super speed, or, conversely, slowing (could be useful), invulnerability, the gun for firing at units from afar, strength ball, and more, as well as bonuses and individual bonus levels (bonus level, in contrast to the usual life under no circumstances not to lose).

From the point of view of graphics Cybersphere also looks great – here is a great special effects of explosions of blocks, nice bright palette, a clear rendering of details. And more about it, as well as almost all other games of this genre, to say practically nothing. This, of course, not a masterpiece (which may even be among the breakout), but still very nice and solidly made in all respects the thing which is perfect as a relaxing stay.

Tired of your same old routine, want to add some entertainment and fun element in hour life? Play one of the best videogame Cybersphere online now and change your boring oold routine for good.