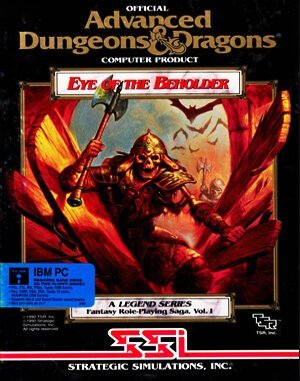 Eye of the Beholder

Click here to play Eye of the Beholder online
4.7 /5
The lords of the city of Waterdeep hire a team of adventurers to investigate an evil coming from beneath the city. The adventurers enter the city's sewer, but the entrance gets blocked by a collapse caused by Xanathar, the eponymous beholder. The team descends further beneath the city, going through Dwarf and Drow clans, to Xanathar's lair, where the final confrontation takes place. Once the eponymous beholder is killed, the player would be treated to a small blue window describing that the beholder was killed and that the adventurers returned to the surface where they were treated as heroes. Nothing else was mentioned in the ending and there were no accompanying graphics. This was changed in the later released Amiga version, which featured an animated ending.

Eye of the Beholder game description

Something evil is lurking below the city of Waterdeep. The Lords of Waterdeep summon a group of heroes to investigate, but someone or something has been watching the proceedings. After the heroes enter the sewers, the ceiling collapses behind them. The only way out is the way down, into a dungeon filled with monsters, traps and puzzles.

Eye of the Beholder is a dungeon crawler RPG with a first-person perspective based on the 2nd Edition AD&D rules. The starting party consists of four characters and up to two NPCs can join later. Combat and magic happen in real time, similarly to Dungeon Master. There is a variety of monsters to fight and spells to cast. The game features a point-and-click interface for fighting, spellcasting and handling objects.

The possibility to increase the size of the player’s party through the recruiting of NPCs was a tradition in all of the Eye of the Beholder series. It was also possible to import a party from Eye of the Beholder into The Legend of Darkmoon or from The Legend of Darkmoon into Assault on Myth Drannor; thus, a player could play through all three games with the same party.

Copy protection codes required in order to play the game.

Play Eye of the Beholder online

You can play Eye of the Beholder online here, in web browser for free!