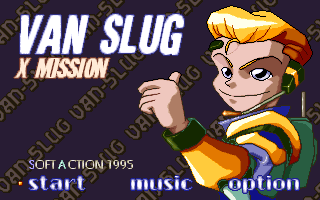 Samsung Electronics Co., Ltd. released a DOS game named VanSlug: X Mission in the year 1995. If you are interested in playing this Platform online, then click here.

Subjected to at the time, absolutely annihilating criticism of the Korean arcade.

The plot is conventional: to play for a detective named Anslag from the world of the future, whose task is to destroy monsters from the suburbs are terrorizing the city. There are still some plot supplied in the form of animated inserts, however, the entire text is in Korean.

In fact, the game is not as bad as it sometimes try to imagine - she's just, on the one hand, almost does not contain some truly special items, on the other - a difficult and, let's be honest, a little snug. Only five levels, and they are very long, and to persist in the course they can not in any way; at the end of each we are waiting for the boss battle, but really difficult these matches will not be called. Enemies in the game much more difficult, and the main difficulty in battles is the unresponsive control shooting and jumping (and jumping here will have quite). In rest, everything is standard: the initial weapon has unlimited ammunition, and the subsequent more powerful that you can take as you progress through the levels - is limited; interestingly, you can shoot not only horizontal, but also diagonal trajectories; of course, there is the possibility of collecting power-UPS such as replenishing health and ammo, energy, shield and bomb.

I must say that the graphics in this game are not the worst, although its scrolling and the "childishness" of the drawing has been criticized even in the year of exit. The unpleasant point is the fact that total, it would seem that "child" environment of the game (the enemies are really very funny and some frivolous) dramatically and unexpectedly contrasts with periodically find you half-dead mutilated people - soldiers, who before death give you some tips on passing. In a word, if not to wait from this game something outstanding, but just consider it as "another platformer" with no claims to anything, you can even receive from it pleasure.

Do you want to relive your memories and play VanSlug: X Mission online in your browser? Play it now for free.