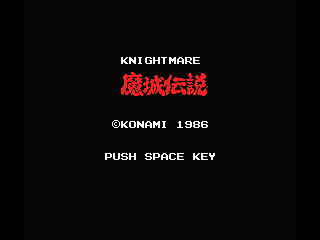 In 1992, a DOS game was released by Friends Software. The game was called Knightmare and belongs to Action genre. Play it online by clicking here.

The lone knight, tirelessly going forward, continually saving the world from huge hordes of monsters, undead and demons, – this, briefly, is the essence of code geass the first part of the cult at the MSX series of the peerless leaders of this platform – Konami. Brave (or simply foolish) hero collapses at the sight of obstacles, not afraid of the hordes of terrible beasts and does not retreat before the hosts of hell opposing army. Our goal is to do everything possible to crusade the nameless character was a success.

As usual top-down scroller'om no frills, Knightmare, however, is of particular interest for every fan of these arcades, and this interest is mainly formed due to the atmosphere, sort of dark ages, when witches, wizards and the evil magic of inspired people is an overwhelming horror, which spawned a lot of scary legends and imbued with a sense of desperation tales. Just look at those creatures who are our noble knight so rashly challenged: the flying grey orbs, spitting at us with deadly clots, winged creatures, at breakneck speed, cutting through the screen, skeletons, neatly throwing the bones, even the dark knights, similar to our character, but who had gone on a curve track. And this is only the beginning of a long list of those jumping, running, crawling and throwing in the suicide attack bastards who will stop at nothing just to prevent us to reach the goal.

But despair not! After all, our hero is not as simple as it seems at first glance. First, armed with arrows, and later – if you're lucky, of course, daggers, boomerangs, and fireballs, he tirelessly gives back hellish creatures of all stripes, not making breaks. A good help are the bonuses that remain on the broken path of stone blocks or descended from above in black "bubble". These bonuses represent a very powerful argument in the fight against the advancing creatures, and occasionally with their help, you can become invincible, to get an additional protective barrier to stop time and even to destroy all enemies on the screen at once! But despite this, the main weapon of a knight is his own skill is just learning to avoid the shots of opponents, you can get a small chance to win.

In the later levels of the endless process of destruction of monsters is diluted by the need to overcome natural obstacles like rivers and chasms. At such moments you have to act particularly quickly and with your shots "feel" the road ahead in an attempt to detect hidden crossing. And at the end of each level waiting for the insidious and powerful bosses using unique attacks and is able to withstand huge amount of shock, before going after his henchmen.

Standing out is unusual for such arcades entourage and a "total neskuchnogo" what is happening, Knightmare, however, will appeal not every player. And all because it features a downright mind-blowing complexity. After all, despite his horned helmet and high rank of knight, our hero can't withstand more than one blow opponents, and those, in turn, taking not only numerous, but high survivability. And the speed is definitely not one of our virtues, and to evade monsters and flying from all sides of the shells when they have filled a good three quarters of the screen is possible not always. And yet – feel like a noble warrior and to contribute to the eradication of the dark legions in code geass everyone can, and even so, the game deserves the attention of all true lovers of antiquity.

Want to play Knightmare online now, play it on your browser here.