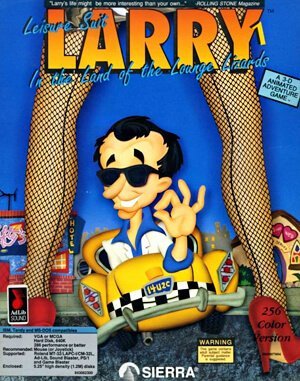 Click here to play Leisure Suit Larry in the Land of the Lounge Lizards online
4.6 /5
Larry Laffer is a 38-year-old (40-year-old in the 1991 remake) "loser" who lives in his mother's basement and has not yet lost his virginity. Having grown weary of his lonely existence, he decides to visit the resort city of Lost Wages (a parody of "Las Vegas") hoping to experience what he has not lived before, and to finally find the woman of his dreams. Larry starts with nothing but an out-of-style 1970s disco-era leisure suit and $94 in his pocket. His quest involves four possible women: a nameless, seedy-looking sex worker; Fawn, a club-goer of low moral fiber; Faith, a receptionist who (true to her name) is faithful to her boyfriend; and Eve, a bathing beauty and Larry's ultimate goal.

Larry Laffer is a short, tacky, balding, forty-year-old man who has been living with his mother until recently. He used to be in the software business, but decided to leave everything behind as he moved to the city of Lost Wages in pursuit of sexual fulfillment. Clad in a white polyester leisure suit, Larry finds himself outside of Lefty’s Bar, determined to finally lose his virginity – or commit suicide if he is unable to achieve that goal before dawn.

Leisure Suit Larry in the Land of the Lounge Lizards is the first game in Al Lowe’s Leisure Suit Larry series, largely inspired by the text adventure Softporn Adventure, though with a greatly enhanced script containing more humorous descriptions and dialogue. The gameplay is similar to other third-person Sierra adventures: a text parser is used to input commands for interaction with a graphical environment. Progress is achieved by collecting various items and figuring out which of those may be essential for conquering the hearts of the several female characters appearing in the game.

The game allows the player to access most of its locations (a bar, a casino, a convenience store, etc.) from the very beginning, with only a few key ones being barred due to the lack of a crucial item. Moving between some of the locations can only be done by cab. Paying for those trips, as well as procuring some of the items, requires the player to manage Larry’s finance by gambling at the casino. Typical of Sierra games, progress is tracked through a set amount of points, awarded for advancement or minor actions. There are several ways to die in the game, most presented in a humorous fashion. The game contains adult situations and semi-implicit depictions of sex.

You can play Leisure Suit Larry in the Land of the Lounge Lizards online here, in wbe browser for free!