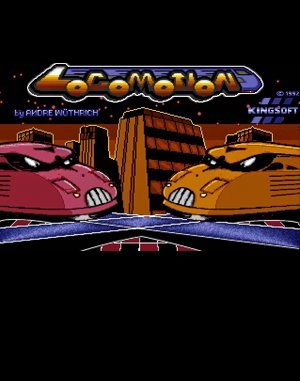 Click here to play Locomotion online
5.0 /5
An early time-management, puzzle game. Originally a 1982 Konami arcade game, it was ported to the Intellivision console that same year, and then received a 1992 enhanced remake for the Amiga, PC, Atari ST and C64 computers.

Locomotion is an arcade-puzzle game in which you are presented with a top-down view of a railway network with a number of stations and junctions. Trains are released from stations at random intervals, each with a destination station. Your job is to get a set number of them to this destination within a time limit. Play Locomotion online!

You control a cursor which can click on each of the junctions, toggling their positions. When trains reach a junction which is not set in a direction they can move through, they will stop until you move it. When they reach the wrong station they simply reverse and continue. If two trains make contact, they are lost, and a penalty is accrued.

The many levels in the game consist of various set-ups of railways and stations and the player has to make sure they all arrive at their destination unharmed (i.e. without crashing). At random intervals, stations will start flashing and a train will emerge with a letter on it, indicating what the train’s destination is. The player can influence the path of the train(s) by switching around the railways, avoiding crashes and sending the trains to the correct stations.

You can play Locomotion online here, in web browser for free!

Chamber of the Sci-Mutant Priestess