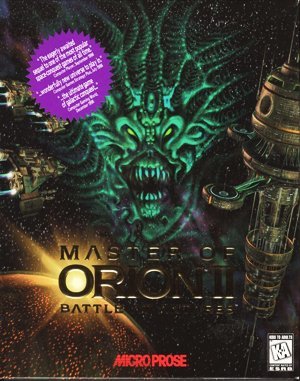 Click here to play Master of Orion II: Battle at Antares online
4.7 /5
The sequel to the acclaimed original 4X game in which the player commands an empire in his quest to conquer the galaxy by multiple means.

The player takes the role of a ruler of one of thirteen races, while also having the extra option of creating a custom one. They must manage planet resources to build ships and facilities, improving production. Exploration of the galaxy is done via scouts and colony ships, which can establish new planets as part of the empire. Research must also be done to discover and utilize new technologies. Alien civilizations which are encountered can be negotiated with, or ships can engage in combat in a turn-based grid system. As new systems are explored, random events are triggered and strange artifacts found in orbit around unexplored planets. Wormholes can also be found which allow transport across dozens of parsecs into new star systems.

Legends speak somewhere in space of the mystical planet Orion. Created by the Ancients, it remains unclaimed due to a powerful Guardian that orbits the planet and keeps out intruders. These same Ancients long ago fought a war against the Antarans and banished them into another dimension. Now… long after the Ancients empire has vanished, new races take to the stars, wishing to establish their own star empires, defeat the Antarans and become… The Master of Orion.

The game can be won in different ways: Through conquest of all other races, Being voted supreme leader of the galaxy or destruction of the Antarans race.

You can play Master of Orion II: Battle at Antares online here, in web browser for free!