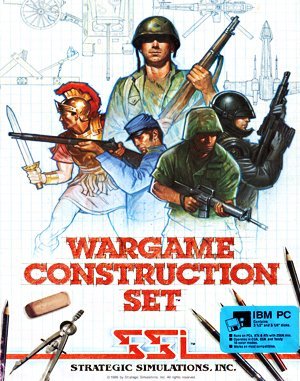 Click here to play Wargame Construction Set online
5.0 /5
WCS lets you design and play turn-based strategic battles. You can create scenarios in many different time periods including modern day, ancient times, 1800's, and in the future. You have complete control over all the units, and can customize their firepower, movement points, strength, aggressiveness, etc.

Wargame Construction Set is a video game builder series published in 1986 by Strategic Simulations. It is also the name of the first application in the series. Developed by Roger Damon, it allows the user to construct, edit and play customizable wargame scenarios. It was released for the Amiga, Atari 8-bit family, Atari ST, Commodore 64, and MS-DOS. Play Wargame Construction Set online!

The application is based on Roger Damon’s source code for Operation Whirlwind, Field of Fire, and Panzer Grenadier. It lets users design and play wargames from simple to complex. Users start by drawing maps and placing geographical features and buildings in any arrangement and scale desired. There are several levels of combat: from man-to-man engagements to large scale strategic campaigns. Each unit can be given different attributes such as unit type, weapon type and firepower, movement and strength points.

Users are able to create scenarios from many periods of military history, ranging from spears and catapults to missiles and tanks. Users can create various genres of wargames including sword-and-sorcery fantasies or science-fiction battles.

The game comes with eight pre-made ready-to-play scenarios which can be modified or played as-is.

You can play Wargame Construction Set online here, in web browser for free!