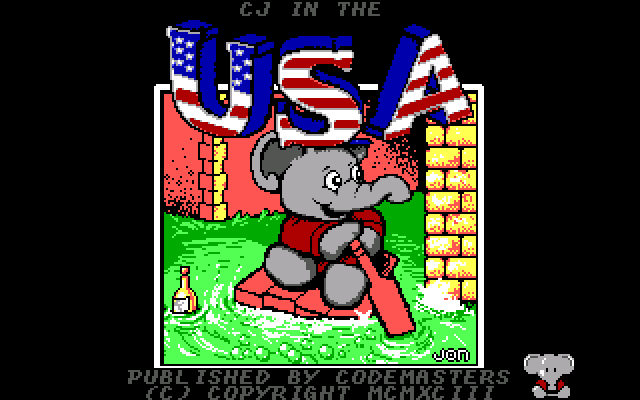 Click here to play CJ in the USA online
5 /5

Do you think old video games are boring? Play CJ in the USA, it is a Side view perspective game developed by The Codemasters Software Company Limited and released on DOS in 1993. You will then know that you were wrong.

CJ in the USA description

The continuing adventures of CJ the baby elephant that started in the game CJ's Elephant Antics. Successfully (and not without your help) when they reached their native Africa after escaping from a trapper, CJ was not destined to enjoy peace. Evil Hunter (Yes, with capital letters, – Evil Hunter!) kidnapped younger brothers and sisters, our hero, who, alas, is not as brave and resourceful as he, and hid them in different parts of the distant United States of America. And now the brave elephant will have to go overseas to save their loved ones.

The game itself is actually the same first part, just in other "scenery." CJ is exactly the same nine lives, his gun is the same – an endless supply of peanuts, which he shoots from the trunk, and "smart bombs" that will look at levels. We still collect bonuses in the form of food, levels are now only four, each of which is necessary to save one's relatives, but their sizes become really large. Changed first enemies – now it's the cops, the Indians, angry dogs and even huge players in American football, cowboys and gangsters and the soldiers of the Ku Klux Klan (!), but they all look like the enemies in the first part, very funny (except perhaps the last, of which I personally destroyed with great pleasure). At the end of each level we naturally expect the boss.

Features of the game also remained the same – have a lot and very often jump up on the platforms and blocks, trying to avoid falls and traps that are presented here are mostly spikes. Graphically, the game looks just as good as the first, - nice and bright painted picture. So the verdict is exactly the same as for the previous section, is the beautiful old platformer, colorful, fun, but quite challenging, which for fans of the genre will surely become even more valuable than Elephant Antics (for find this game, to put it mildly, not so easy).

Play your favorite childhood game CJ in the USA online in your browser for free here.