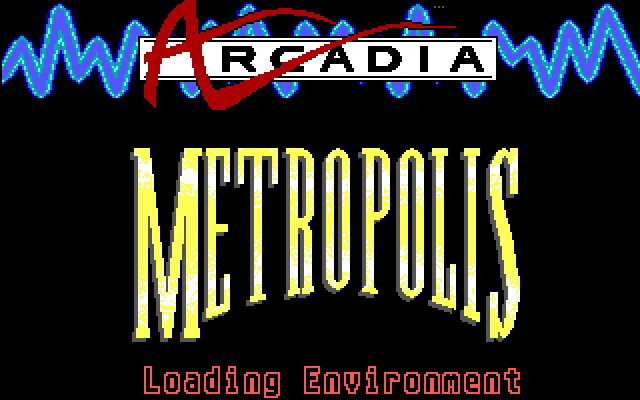 A Adventure game, Metropolis was released in 1987 by the famous developed Melbourne House. It is a DOS game and is perfect for all video game lovers.

Virtually unknown and extremely complex futuristic quest. The action takes place in the very distant future kiberpank in 5067 year. Your hero – the agent of the security service of the megacorporations IC&D involved in developing new software. His task is to reveal a few upcoming against the Corporation of crimes in different parts of the huge size of the city of metropolis, inhabited, both by people and robots.

Levels only ten – the number of plots, and pass them continuously, one after the other. The game on the side. The gameplay is based on conversations with the NPC, and, like many very old quests, the game is based on a text analyzer, that is, phrases for conversation will have to print it yourself. In this respect, the game is considered a true masterpiece – its "dictionary" is more than twenty thousand (!) words she can understand, including simple phrases in the "conversational" English (but it should still be just a phrase, not just a set of words).

But such thing as a inventory, the game has no in principle – all the puzzles are solved, or conversations with the NPC (sometimes very very long and complex) or performing some action with a variety of devices. But in this case, the game is only good because of the conversations and the characters here are really very colorful.

Perhaps graphically, the game even for its time, looks a bit dated, but actually the black space backgrounds is a rare and utterly vivid game objects just create the right atmosphere of the dark city of the far future. Verdict – definitely a very big fan of the genre, because too unusual and original game, but the attention and of sufficiently high rating is well deserved.

Enjoy playing Metropolis online, it can be played on your browser and is free.