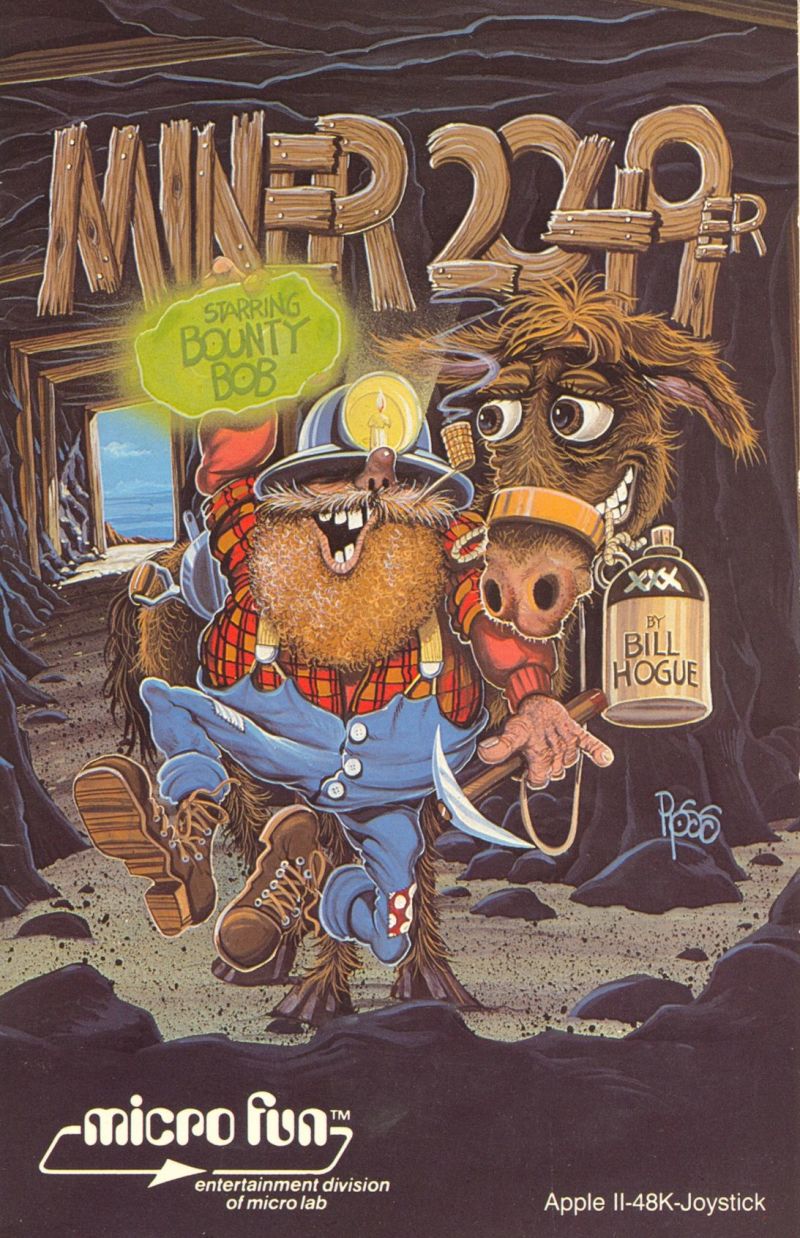 Great news for all the old video game lovers, now you can play the best Action game, Miner 2049er launched by Big Five Software in the year 1983 again. Play it online now.

Very old platformer, in ideas similar to most games of this genre the early 80-ies. Your hero – investigator of the mines by the name of Bounty Bob, the task of which is to examine literally every inch of ground in the mine for ten levels (this is done on the job Yucon'and Yohan'a). As you progress through his feet on the ground mine it changes color; when the whole earth is passed and found some special bonus scene (from the bombs of dynamite to the axe – at every level it is different) – you can go to the next level. And it would seem – nothing complicated. But in fact it is certainly not the case.

Each level consists of multiple platforms, connecting them ladders and many other objects, and in some parts of the floor (especially at levels near the start of the game) to achieve is quite difficult. The most traditional way up and down the stairs, but he, of course, helps not always. Somewhere you can jump (in case of a fall from height – death, so you have to jump very carefully, it's actually one of the basics of the game), and somewhere – only with the help of special tools, from the Elevator and trolley to the cannon (which shoots the hero...).

Of course, there are enemies – radioactive (!) creatures that stand in the way of the hero to his strange goal. In most cases, from them it is advisable just to run (or jump), but you can find some bonuses that will make them temporarily vulnerable, and then if the hero will encounter a creature that will kill him. In a typical situation everything will happen exactly the opposite... Another danger – radioactive waste in which in no event it is impossible to get, otherwise is also death. Let the formal levels are not so much, but almost every one of them is really complex, requiring not only careful thinking through the strategy of his passing, but often a fairly quick reaction and decision-making.

Graphically, the game... good. Such a schedule cannot and should not be judged, no matter how miserable some people it may seem. This is the living classic of the genre, and most importantly – that everything that is shown on the screen, quite visible and clear, and that not all is depicted similar to their real prototypes, even great. And let the game itself can also be declared someone develops the ideas of Apple Panic, Donkey Kong, or something else, but the originality that she had in no way takes away. If someone haven't seen – must see.

Not sure how to pass your time, why not play our classic videogame Miner 2049er online? And the best part, it is for free!