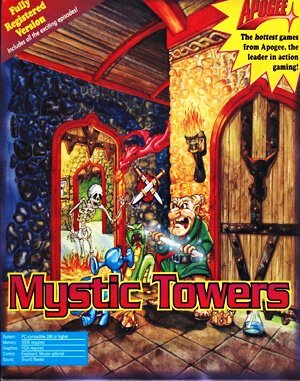 In Mystic Towers, the player takes control of an old and rather eccentric wizard Baron Baldric, whose task is to venture into the twelve Towers of Lazarine and clear them of monsters. The game is a follow-up to Baron Baldric: A Grave Adventure. It is primarily an action game with puzzle-solving and role-playing elements.

Each tower consists of 45 rooms (9 rooms on each of the 5 floors), 15 monsters, and 1 monster generator. The objective is always the same: defeat all the monsters, deactivate the monster generator, and find a way to escape from the tower. The player navigates Baron Baldric through isometric environments, fighting monsters in action-based combat, jumping, avoiding obstacles, and collecting various items. Some of the items are required to solve a puzzle (such as unlocking a room), while others relate to the RPG elements in the game.

Along with the usual HP (health) bar, Baron Baldric also has a food and a drink meter, which means that the player has to find edible products and beverages to prevent the hero from dying. The old wizard mostly relies on spells in combat; these can be purchased from vending machines. In addition, Baldric collects points when he finds treasure; these points eventually add an extra life, up to nine in total.

There a total of ten spells in the game. The first five are damage spells (Ice, Sulfur, Venom Cloud, Fireball and Lightning) for killing monsters and only the Ice has infinite ammo. Damage spells with greater power are rare and must be utilized strategically. The other five spells (Reveal, Heal, Teleport, Levitate, and Bomb) are utility spells each with a unique purpose. The Reveal spell lights up dark rooms, reveals hidden doors, treasure, and poison tiles.

The Heal Spell restores Baldric’s health and cures poison. Teleport can only be used on a teleport pad, which transports him to the floor indicated by the number on the pad. Levitate makes Baldric float one level above the floor and the spell can be cast many times to float even higher. Baron Baldric can return to the ground by jumping. Finally, Bomb can be cast only on a monster generator, as part of the criteria of completing the level. Although all the spells are collectible, only the damage spells are purchasable. Several monsters can cast spells, with seemingly no limits, the Venom Cloud having the ability to poison Baron Baldric, and Lightning being able to kill in two hits.

You can play Mystic Towers online here, in web browser for free!