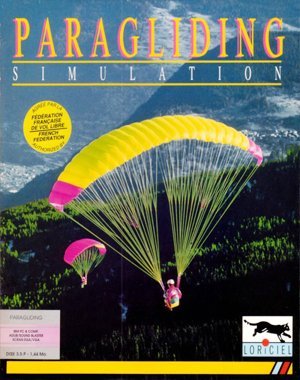 Click here to play Paragliding online
5.0 /5
Probably the most obscure Loriciel game ever made, Paragliding (a.k.a. Paraplane) is a fun simulation of gliding sport – perhaps the only one ever made for the computer except for the fun paragliding event included in Epyx’ California Games 2.

Paragliding MS-DOS game is an enhanced remake of the original Paraplane for Amstrad CPC. You can play Paragliding online here, in web browser for free!

Different stages of player’s skills allow you to play a different types of games. While Practicing you may complete the exercises to train yourself in main gameplay actions such as taking off, landing, flowing using air currents, etc. While Strolling you may explore the flags/balloons positions and relief of the four places of the world (Arabic Desert, Green Alps, Snow Mountains, and American Canyon), where paragliding events are set. While Competition you may, choosing one of eight nations of players (Japanese, English, American, Spanish, Russian, French, German, and Italian), to make a score, collecting the flags and balloons and taking into account the time flowing. While Championship you with up to 4 players may challenge each other completing one after another the different events such as speed, precision, technique, etc. High scores are saved in the Hi-Score Table.

The gameplay includes enjoying the intro music, taking off, paragliding using air currents and clouds, avoiding the static and dynamic obstacles, collecting the flags and balloons, and landing.

You can play Paragliding online here, in web browser for free!

The Dream Team: 3 on 3 Challenge