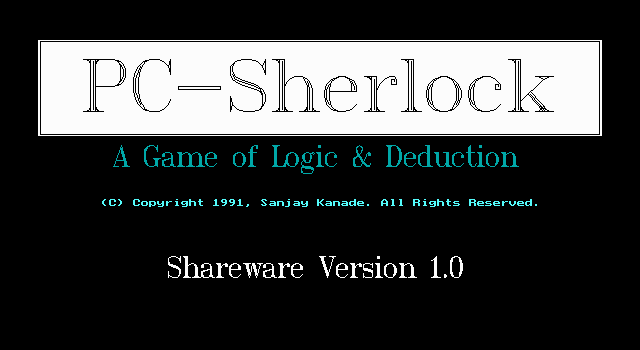 PC-Sherlock: A Game of Logic & Deduction

Do you want to relive your good old memories? Play PC-Sherlock: A Game of Logic & Deduction again, it’s a perfect DOS game launched in 1991 and a must-play for all video game lovers.

The name of this game is extraordinarily like belonging to the same genre of puzzles, "Sherlock", which is even described by its author in such terms ("This is a game of logic and deduction..."). Because I lost both games almost at the same time, it is difficult to say definitely which of them is what inspired; however, for the offspring of Sanjaya Canada a parallel with the far more popular work of Everett Keyser disservice: not so long ago, freely distributed by the author, this game is presently almost unavailable in the network, because large online collection of old games, and related torrents offer under her name... all the same "Sherlock". But all the more reason to get acquainted with this little-known rarity.

In fact, from Sherlock Holmes, here is nothing: "PC-Sherlock" is the computerization of the famous Board game "Bulls and cows" (the color and the Western version is known as "Mastermind"). The gameplay is extremely simple: two players (or in this case, the player and the computer) make each one a four-digit number, and each have seven attempts to guess what made another. Attempt will require you to enter the four-digit numbers, numbers which are not repeated, the answer is an indication of how much the proposed option of "cows" (the digits in the hidden number present, but are at other places) and the bulls (that is, numbers, guessed completely right, up to position). The player goes first, and analyzing the obtained "bulls and cows" answers computer opponent, gradually gets to make artificial intelligence of numbers; to win, you must do this before the enemy, before whom we should be held accountable for compliance with them is expected of our option plan.

Because anything radically new to the traditional gameplay brought to be no different, the author of the game could do that whole process and detailed documentation to it. And this particular part came from Sanjaya Canada almost perfectly. Visual design in EGA-palette is made rather ascetic: we are listed in two table cells for the dialed number; the inscription in large letters at the bottom explains that at the moment occurs – whether from us or the opponent thought for a few seconds; there is a hint about the control keys and the current account. In General, concise and to the point: there is nothing superfluous and nothing distracts from solving logical problems; sound or music is missing. But the tutorial mode, and help with explanations of the nature of the gameplay made extremely detail – and even with elements of interactivity. So, the program ask us to enter the correct number of "bulls" and "cows" for a few examples – in order to make sure we understood the rules. There is also a training mode ("Skill Builder"), in which we simply guess the number alone, not competing with the computer. If that may seem enough to offer a version of "PC-Sherlock" number 2.1 from 1996, the author added a text document "Examples of logical analysis", with examples and explanations of the logic solving game puzzles. To complain about is that unless the lack of Hot-seat mode to play only alone or for a couple with artificial intelligence.

Shareware version of the game, register, which can be had for $ 12, contains – in addition to the screens asking for the remuneration of the author after 30 days of use – only one serious limitation: you can only make four-digit numbers. Bought the full version could be easier, referring to the numbers of three digits, and to try your hand at five-a of this puzzling sports through the courtesy of the author now that the publication is distributed free of charge. However, four digits is just a classic, and therefore this regime can be enough to enjoy classical Board game in a very good computer performance.

Do you want to relive your memories and play PC-Sherlock: A Game of Logic & Deduction online in your browser? Play it now for free.