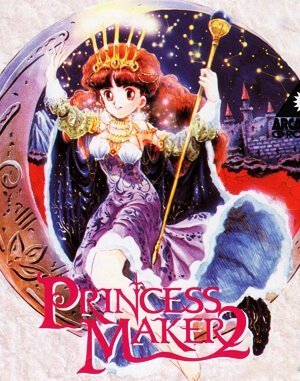 Click here to play Princess Maker 2 online
3.8 /5
There once were a city in the world of mortals. Its king was proud of his position, and its people were arrogant about their wealth. Its rulers made light of the gods and ceased to worship them ...

In this fantasy game, the player takes role of a war hero who raises a girl to the age of 18. At the end of the game, the daughter goes into a line of work; what this work is, how much talent she has for it, her marital life, and her overall happiness all depend on the player’s actions.

A hero saved the human race from utter annihilation by the gods. This same hero then was charged by the heavens to take care of young seed dropped from there. This seed becomes his daughter, and her guardian will be watching her progress.

In Princess Maker 2 the player assumes the role of a father to the blessed daughter of the heavens. For the next eight years, the hero will nurture and guide her in the path of the player’s own choosing.

It is possible to choose the path of the zodiac-influenced daughter by scheduling her to jobs and schools, which will raise her statistics (strength, combat skills, cooking, faith, etc.) Each month allows the player to designate three different tasks for her to follow. Balancing between character development, stress level, health and financial income is the focus of this game.

Mini sub-quests and various plot options revolve around the young lady adventuring in the wilderness, provided that she’s strong enough to tame the wilds. The player can equip her with armor and weapons to fight off wandering random monsters in turn-based combat.

The game starts with the daughter at age ten, from which point the player guides her until her adult years. Choices made during the course of the game will determine her eventual marital status, accomplishments and her relationships with other people. There are 74 unique endings in the game.

You can play Princess Maker 2 online here, in web browser for free!