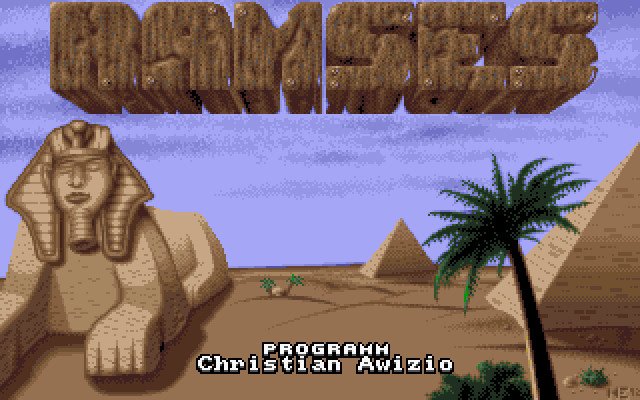 As we all know, the most "canonical" (and almost the only more or less widely known) strategy game, Ancient Egypt is the game Rayman 1999. About a much earlier strategic game on the same theme – The Day of crimson skies – who knows little. But about the game play, which is also strategy - no one at all. But it is, nonetheless, there is, moreover, now a chance to get acquainted with this lost, it would seem that rarity is for everyone.

Ramses strategy trading, and has a very "old" age. This means that, unfortunately, to talk about it not so much because of differences from many other famous games of this direction are almost there. There is a not very large initial capital, it is possible to buy the ship (while one, but you can choose from a few suggested that something different), there are products which you must sell in order to raise capital – first, to improve the ship, and then to buy new, and own well-being. All the action takes place in ancient times (second Millennium BC) on the map of the Eastern Mediterranean, where we will boldly blaze new trade routes, along the way trying to beat our competition (the game can play up to four players, including real people with one computer).

But it really is worth noting – because it is a graphic that seemingly never been a strong point of the old policies of this plan. But here we are waiting for is not just color and very high quality drawing of the map of the world and buttons of the interface - here we are waiting for even animated pictures and small monologues!.. For example, what is the only merchant vessels, which meets us at the beginning of the game and prompts you to select the ship (each of which is also shown animated and very curious)!.. In General, visually the game is very nice, and not very difficult.

The verdict is, of course, not a masterpiece, but still quite worthy and unjustly forgotten (and rather lost) a representative of the old trading strategies, which, in my opinion, fans of the subgenre will have quite a good choice.

Enjoy playing Ramses online, it can be played on your browser and is free.