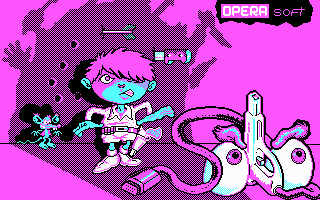 Solo, a 1st-person perspective game was developed by Opera Soft S.A. in the year 1989. The Arcade is so rewarding that you will thank us later. Play it online now.

This game is in the genre of virtual gallery from the first person represents in some sense a kind of realization of Russian folk poem about a little boy Carlito who found the gun. However, here he found no gun and only a gun, but is quite real and shoot, and shoot he will not according to the villagers, and "bad guys", who undertook to quarter him out of nowhere, and before he knows how found a bag with a gun, almost killed him.

About the gameplay to say a lot is impossible: on the screen just be thugs (like the post-apocalyptic punks) in which you need to aim and kill. To play is not very difficult, but killing enemies can easily. The graphics in the PC version is inferior to the picture with other platforms, but in General, everything is traced very well. Interest, as well as two other games from the same category, is the first turn that was originally "sharpened" just under the light gun, and until very recently could not function in E. DOSBox'