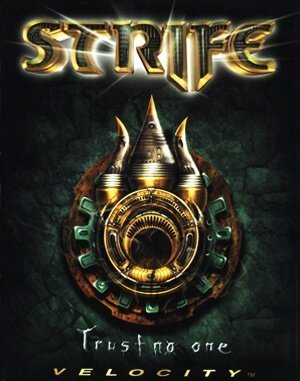 Click here to play Strife online
5.0 /5
The game is set some time after a catastrophic comet impact, which brought a deadly virus onto the planet. The resulting plague caused deaths of millions of people, while other victims were mutated and began hearing the voice of a malevolent deity. They formed an organization called "The Order" and enslaved the rest of the populace. However, a rag-tag resistance movement, called "The Front", is trying to topple The Order's reign.

In the distant future, the Earth is ruled by a group of people who call themselves “The Order”. Many disasters have plagued the planet, and after many wars, misery, and death, the Order controls people’s lives and deprives them of their freedom. A rebel organization has been formed, seeking to overthrow the Order and whoever else might be behind their rise to power. Somewhere in the depths of a ruined Town Hall, a group of people who oppose the Order’s regime welcome a lone wanderer to become the one who will free the Earth from terror.

Strife is a plot-driven first-person shooter that uses the Doom engine. Rather than taking the player through a linear series of levels, the game offers a continuous world with free-roaming elements and a central “hub” (the town), which the player can visit between missions and explore. Although there are no true role-playing elements in the game, it has several features rarely seen in contemporary FPSs: there are “friendly” areas where there are no enemies but people to talk to, stores where new equipment can be bought, and taverns where the latest gossip is told. The player can also purchase upgrades that permanently increase the player character’s health bar.

The game has a branching storyline with a few paths that lead to three different endings. These paths are determined by a decision the player makes during the course of the plot.

You can play Strife online here, in web browser for free!