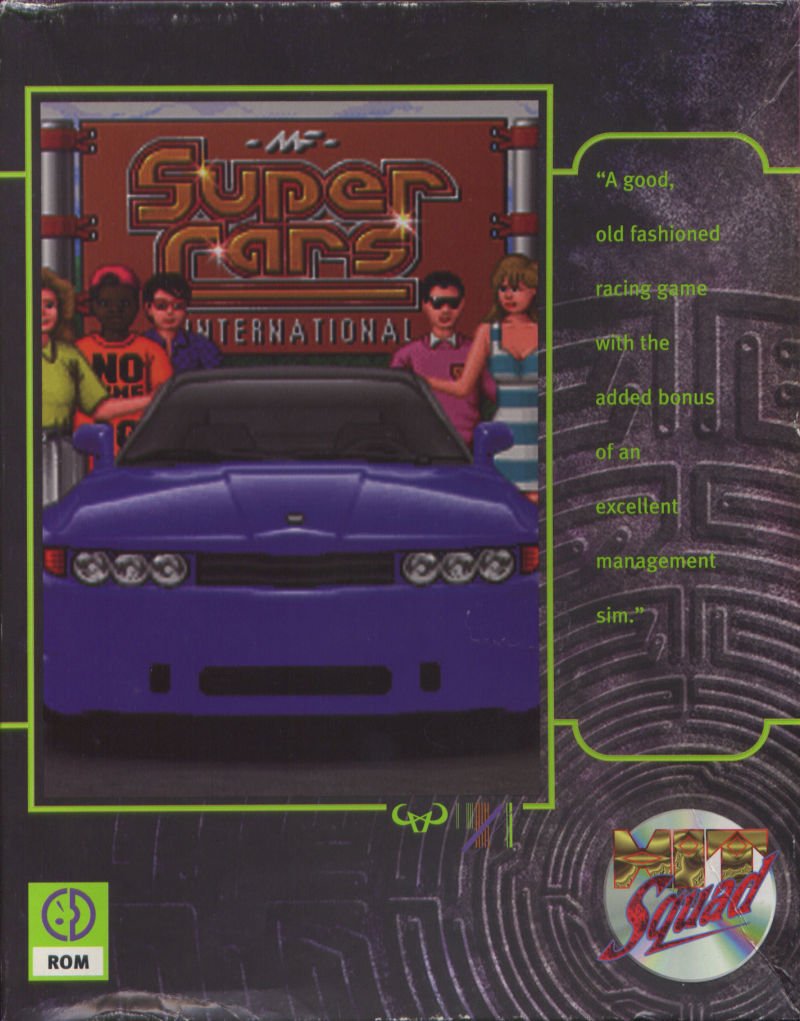 In 1996, a DOS game was released by Magnetic Fields (Software Design) Ltd.. The game was called Supercars International and belongs to Racing / Driving genre. Play it online by clicking here.

The third part of the series "combat" racing with the top view (the first two on the PC did not come out). Is, in fact, an improved version of the second part of the series – even the route, of which a total of twenty-one, is entirely transferred from the previous game (although now they can be played in any order and independently determine the number of laps on each track which you have to pass to win).

The game consists of two parts – the actual racing and "race management"; the second part of the game is optional and can be disabled in the settings at the start. This "management" part of various static screens with mini-games in the form of dialogues with people, where you are conversing with them, buy a car (even before the beginning of the game and trying, of course, to reduce the price; you can later buy a new car, better than the current); for winning races pay the money, and the race itself, as mentioned above, the most that neither is combat, that is earned for winning the money you can spend on buying weapons and armor, for these items, too, you can bargain.

It is worth noting that the more expensive model of the car – so it is not only more powerful and faster, but can "carry" a greater variety of weapons. Access to a specific weapon only appears after completing certain runs. If during the race the car got some damage to repair it for the money during the break is also possible. Plus there are still a number of such "interactive mini-games" in relation to arise in game situations. So to deactivate this mode is strongly discouraged.

However, the core of the game is, of course, the race itself, which is in the Supercars International performed very rapidly and simply great, in the best tradition of the subgenre. Despite the fact that this race, of course, an arcade, some realism in driving is present, there's also a damage system, the car can roll over in a collision (which is not often found in games), there are effects, skid marks and gouges in the terrain where the machines explode. Racing rivals is actively used on each other of their available weapons, and you can always choose what kind of weapon you want to use.

The atmosphere of traces cannot be clearly attributed to a certain style unless such is not considered is the real madness: so, there are not only slopes about, for example, railway crossings or the like of a roller coaster, but in the dark tunnels and around a huge gate that periodically closes and can crush a car. There are three levels of difficulty for completion of each season, but it should be noted that in themselves the tracks on any of them differ in order of difficulty.

The graphics in Supercars International is just gorgeous – not only and not so much in race mode (though all the objects are drawn is also very good), but in "management" mode: why are only the portraits of your companions and the interiors of their offices – the quality of the drawings even in those Golden years was not too often. There is also the possibility to play together on one computer – at is divided into two parts the screen.

In short, it is really a wonderful race that is able to deliver a lot of pleasure as connoisseurs of thoughtful management and even the dialogues, brings to mind role-playing, and fans busy, but calling an unprecedented adrenaline rush of arcade gameplay.

Want to play Supercars International online now, play it on your browser here.