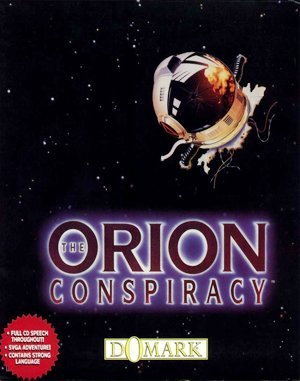 The Orion Conspiracy is a futuristic point ‘n click adventure game set in the year 2160, when space travel is a common thing. The player controls the Irish man Devlin McCormack as he arrives at the deep space station Cerberus following the death of his son Danny. Initially he only intends to stay for a short time, but when it is discovered he was murdered, he decides to stay and investigate the circumstances of the death. Play The Orion Conspiracy online!

It is known best for its adult themes, violence and language. The player is Devlin McCormack, a retired veteran visiting the space station Cerberus to pay final respects to, and later investigate the murder of, his estranged son Danny. Shortly after discovering his son had a gay lover, that lover is also brutally murdered leaving Devlin as the main suspect. Devlin must track down his son’s killer, and the one framing him, while also surviving a sudden invasion of the station by homicidal shape-shifting aliens.

Gameplay is typical for graphical adventures of that time, with a third-person view and a point-and-click interface. When browsing an environment the cursor can be moved over objects. Objects that can be used are highlighted. After clicking them, a number of actions becomes available through icons at the bottom of the screen, such as examining them, or picking them up. There are conversation trees when talking to other characters and both subtitles and voiced speech are supported. The game contains a large amount of profanity, with words that are generally censored or avoided in other games.

The first half of the game mostly involves talking to characters and gathering information about the murder mystery as well as the station, the corporations it serves and its crew in general. The latter half involves a lot more puzzle sequences where the main character has to quickly escape or use an object to avoid being killed. It is mostly devoid of the “arcade” sequences that began to permeate the genre around that time, however.

You can play The Orion Conspiracy online here, in web browser for free!

Wrath of the Demon