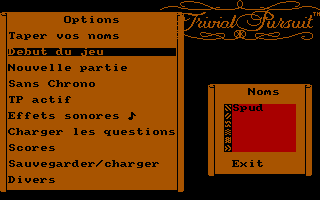 Domark Limited released a DOS game named Trivial Pursuit in the year 1987. If you are interested in playing this Board Game online, then click here.

Historically, the first computer incarnation of the famous Board family quiz, invented in Canada in 1979 and reached its peak of popularity in the 1980s – and in many countries – thanks to teleadapter: even in the USSR Central television released in 1989 under the license of "Trivial Pursuit" under the name "Lucky chance".

British electronic incarnation has appeared on numerous platforms, from popular to advanced Commodore 64 and Amstrad CPC to the already outdated at the time the BBC Micro and Amstrad PCW exotic; a version for the IBM PC looks at the background of his companions are not so ugly, despite the support the only adapter CGA, which is obviously lagging in terms of saturation of the palette – but the quality of sound, it is still inferior to his sisters and rivals. But the gameplay was transferred to the screen virtually unchanged, except for some of those inevitable costs of the realization table entertainment as a computer. First of all, it is worth noting that there is no "artificial intelligence" we have, except for the added Oxford developers "lead" – a fun long-nosed creature that animates the process of making a move and getting quiz questions. To compete in the depth of their knowledge in one PC can from one to six persons, but their answers game test not even think: it is assumed that the opponents are just saying your options out loud – and then, together with friends, compare them to appear on the screen is correct, then pointing to the computer, they were able to come to the right decision or not. In other words, to play alone is not very logical and interesting.

The first thing after starting the "Trivial Pursuit" is required to enter the names of the participant or the participants of the competition, and then if you wish to change the default settings – for example, to disable the host (his name is "TP") or set the timer for the filing of the response (ranging from five seconds to nine minutes). The main screen is a view of the playing field, resembling here the ellipse rather than the wheel, which it should in theory be a large Central cell connected with the outside circumference-the perimeter of the six "spokes", and all cells, of which there are seventy-two belong to one of the seven varieties. Six "flowers" (or rather, patterns of blue stripes on an orange background, for a different CGA palette can not afford) are six thematic sections, whose legend is given at the bottom of the screen: "art and literature", "science", "geography", "history", "sport" and "entertainment". This, along with the usual cells belonging to one or another of the above categories, each field of knowledge there is one particularly large, they are called "houses", allocated additional round and located at the intersection of the "radial" track fields with the external circumference. The seventh type local cells – "dummy": in contact with them, no questions we don't ask and can immediately make the next move. Used to control the arrow keys and the space bar, responsible for the confirmation of any action.

The aim of the game is quite simple: you must visit each of the six "houses" and the correct answer given the question, – for this achievement the player gets a special award, the "wedge" of the corresponding color (i.e., pattern); after collecting all six of these trophies will need to go to the Central position, adorned with all available colors and to guess a riddle on the theme that we choose our opponents (or ourselves in the case of competition with myself): the winner is the one who will do it first. At the top right of the screen you can see the panel the current player with a clear designation of his or her collection of awards is shown below for six "colored" chips, in which contestants are moved to the cells, and at the very bottom flaunts our TP (unless you for some reason did not turn off). This is the character that shoots a dart across the field at the beginning of the course: the accidental in one of the six empty spaces between the "spokes" are numbered from 1 to 6, supersedes and die roll indicates how many cells we should move his piece. It is noteworthy that you can walk in any direction, as by the outer circumference and radial paths or the Central position (of course, while trying to reach the right places). Entering an empty cell, as has been said, means re-running; stop at one of the thematic cells leads to the need to answer a question, and when placed in the center are allowed to choose any of the six knowledge areas. If you wish to throw a dart, you can also handle the statistics screen, in the original table, of course, absent and hotkeys F1: it clearly shows how many answers on which categories each player was correct or incorrect. A successful demonstration of his erudition brings the right of re-course, in the case of failure of such passes to the opponent.

The actual quiz is implemented in the "Trivial Pursuit" is very original: we find ourselves with a screen field in living room, decorated according to the theme, and TP (if, again, not turned off), also, each time putting on special, any situation, headpiece, suitable for a bookshelf on the right and in random order offers us a particular question. In addition to pure text it can be and the picture (especially in the geographical section), or even a fragment of a musical work: I have to admit, both are not the most expressive in the performance, respectively CGA and PC Speaker and – and the authors even apologized in the manual for users of the Amstrad PCW and IBM PC for what on these platforms issues-ringtones can sound a little strange and not very authentic... However, all assignments and without that differ in some difficulty owing to the fact that they are designed for people, familiar with Western popular culture of the 1980s- the British, French or Spanish in accordance with the three presented on our website language versions of the game. And while the classical questions – in the manner of "Who is responsible for the murders in the Rue Morgue"? – cope will be easy (and if you're lucky, you will get a riddle like "What does the name of the Russian newspaper "Pravda"?"), something, say, a native French may perplex those who Sacha Guitry was called "little spring", and perhaps the British will be asked to guess who the Royal family are allowed to vote in the election. On the other hand, the questions in the version of 1987, not so much so that for some time they begin to repeat (is allowed to fix it from the main menu, downloading memory PC next batch) – and search on the Internet, the former is not available the original target audience, are able to simplify the task (not to mention perfect impunity "fraud"). In any case, even in such a humble form of "Trivial Pursuit" is a good way to test or improve your knowledge especially in company with several comrades. It is also worth noting that one of the three above-mentioned language versions of the game – namely English – were lost and there was no free access until the appearance on our website in the last day of the year 2019 from BC

Now, play Trivial Pursuit online for free on your browser and make your boring weekend fun and full of entertainment.