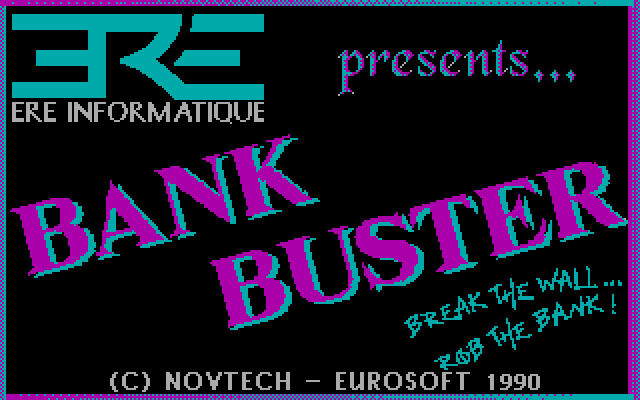 With many different features and various levels, Bank Buster released in 1990 hit the right chords right from the beginning. Play this excellent Arcade game and online now.

Perhaps reading the name of the game, many will think that this is a known simulator of a slot machine, where you earn money. If so - do not guess. This is another not just rare, but simply anyone (dare to use such word) is not a well known game with a completely unique implementation: a breakout game in the entourage of a Bank robbery...

No specific plot, although a brief opening Intro, we can conclude that the action takes place in Paris (the game itself is, if anything, in English). You play as escaped (and not even had time to change) the robber with a pick, who opened the earth (...), broke into the Bank. In the Bank he already has the appearance not of a man, and... the good old platform of "breakout", which pushes the ball, but with a huge and cunning eyes. The ball is also present, as is present and is quite thick wall, consisting of implicit blocks (probably in such a surreal way shown here crushing the Foundation slab of a Bank or some other structural element).

The essence of the game - controlling the ball (it moves by itself Bouncing from the bottom and side walls) using the displacements of the platform, to destroy filled the space in front of him, trying for a limited time to get to the precious treasure which we see immediately in the top of the screen. If before a certain time not to destroy a certain amount of filler, the "coming for us". Come French police, after which the game will end and will show brutal movie, where the unfortunate robber in literally trampled into the ground by the truncheons grinning officers of the law...

Graphics - CGA, but quite lovely, especially considering the fact that arkanoid she never in any way can not be the determining factor, and also the fact that there are excellent animated mini-splash screen (which for some reason you can disable). Overall - nothing, of course, are wonderful, but the implementation of the standard process of arkanoid here more than the original, and the complexity, it is worth noting, is also quite level, so the fingers before playing it is advisable to stretch very, very high quality. In short, if you like the old arkanoid games and is desperate to find some "new old" - you're in luck. Well, it's always nice to Rob a Bank, knowing that nothing's gonna happen, right?..