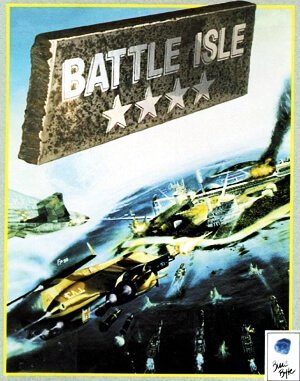 Click here to play Battle Isle online
0.9 /5
The Battle Isle storyline is set on a fictional planet called Chromos, whose society is technologically slightly more advanced than that of contemporary Earth, possessing the knowledge of advanced robotics (robots), computers (AIs) and limited spaceflight (enough to set up space colonies on the moon of Chromos). The individual games represent various wars that took place on Chromos.

Battle Isle is a series of turn-based tactics computer games developed in the 1990s by Blue Byte. The settings are wars on a fictional planet, Chromos. Play Battle Isle online!

On the distant planet Chromos, the Drullian people fight the forces of Skynet-Titan, an AI out of control. The player has to lead the Drull armies to victory in several battles.
The first three games are played on a hexagonal grid for a map.

Players not only control the combat units (ranging from infantry and tanks to helicopters, fighters and bombers, armored trains, surface warships and submarines, stationary gun turrets), but (especially in the later games) also many support logistics units (ammo and fuel transports, scout and radar units, road and construction vehicles, and others). Units have various weapons and can gain experience (which in later games can be transferred over in a campaign). Fuel and ammo is limited, and logistics require careful attention. Players also control buildings, where units can be repaired, and sometimes, produced. Weather conditions change, affecting unit movements (for example, a sea or river can freeze, immobilizing ships but allowing light units to move through it). Fog of war is prevalent and players have to use scouting units to gain information about the battlefield. Some of those options were added in expansions or sequels.

Players have various tasks, ranging from eliminating all opponent forces to capturing specific buildings or protecting certain units or places. In some missions events from outside the battlefield can suddenly change the situation, giving players new objectives, reinforcements, allies or enemies. In some battles there are more than two sides, each with their own objectives, not all of them directly involved in hostilities – some of them can be even allied. At the same time, those allegiances can change because of some events or actions.

Battle Isle one had the screen divided into two parts, one for each player. The turns were also divided into move and attack phases. While one player moved his units, the other commanded his own troops to carry out his actions. Battle Isle 2 gave the player the entire screen, and merged move and attack phases, and introduced the 3-D display of combat. Battle Isle 3 was very similar to Battle Isle 2, with improved graphics, more units and a new storyline. Battle Isle: The Andosian War was entirely set in the 3-D environment and combined elements of real-time and turn-based strategies.

The AI is relatively weak, relying on mass frontal assaults. After a player survives the first few turns and the AI’s overwhelming numbers using protected artillery and terrain advantage, the computer is usually unable to mount a proper defense.

A turn-based strategy game. The screen is split in two, one half for each player. While the first player can move his units, the other can attack and vice versa.

You can play Battle Isle online here, in web browser for free!