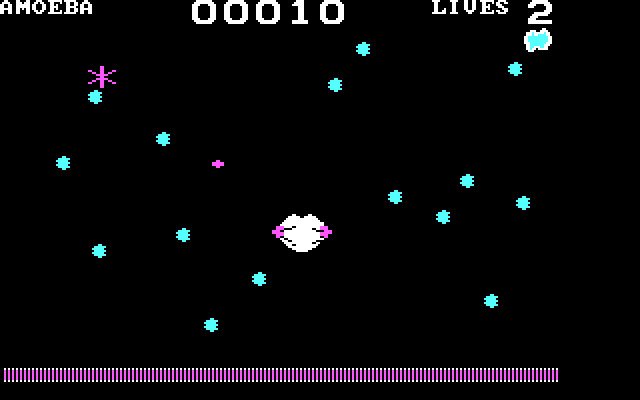 Your favorite game Evolution which was developed by Sydney Development in the year 1983 is now available online. Click here to play.

The oldest arcade game about the evolution of man, perhaps, in some sense, the "forerunner" of Spore. For six levels you acting as a different "links" of evolution, have to perform some simple task.

The first level – the role of amoeba need to eat DNA (!), avoiding a variety of enemies type of microbes. The second level in the role of tadpoles to catch flies, avoiding fish. Third playing for the mouse to absorb the cheese and run away from snakes (but here for the first time we can resist!!!).

At the fourth level, will play for the beavers, collecting sticks for the dam construction and avoiding crocodiles. The fifth level – the game is for huge gorilla that collects the coconuts to throw them at other hostile apes. Finally, the sixth and last level unexpected "classics": the role of man of the distant future, we must defend the planet from aliens with laser weapons and prove that the whole long and laborious process of evolution, we have just passed, was not in vain.

Graphics and dynamics of game process for 1983 is quite good, and the game, in my opinion, it's time to rank as classics of the genre.

Have you ever wondered what kind of video games were played in the good old days? Try playing Evolution online now and we are sure you will not stop playing again.