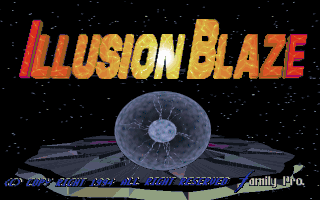 Action game released by SKC Soft Land in the year 1994 by the name Illusion Blaze is an excellent Side view perspective game that can be played online by clicking on the link here.

In the 1990s, many Korean companies were happy to the genre of Shoot 'em up, which means more of its popularity. Illusion Blaze - the horizontal scroller developed by Family Production has already been presented on our website (Shakii the Wolf, Eol-ui Moheom, etc.).

The game is fully in English, starting with the menu and ending credits. First look video, which shows how our ship is being prepared for testing. More about the plot have nothing to say, Yes, here he is and unimportant. In the menu you can choose medium or hard level of difficulty. Next, take one of the two ships - and forward to victory. Illusion Blaze seven missions, with the first four stages can be played in any order. Enemies appear from all sides, firing and trying to Board us; at the end of each level we will have a pretty powerful boss.

The game features four types of weapons, they appear in the panel at the top of the screen in the form of colored balls. We will meet friendly ships (they also need to knock out), ready to give us different surprises. Improves weapon after taking a bonus of a certain color, and after several upgrades of our aircraft turns into a killing machine, destroying everything in its path. You can also pick up the shield before the first injury, an extra life (at the beginning have three) or a bonus that increases the rate of fire. I would like to mention a kind of bomb-boomerang attached to the bow of the ship. At any time you can release and catch back. Mouse control is not supported, but the keyboard is quite comfortable to play.

Illusion Blaze is made in anime style, everything looks bright and colorful: and backgrounds, and all the ships. The music is chosen very successfully. Generally, the game is very similar to the series The Day from Mirinae Software, but not so complicated and it is quite real. Recommended to all fans of the genre Shoot 'em up.