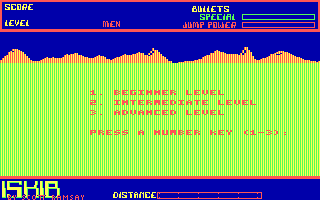 Do you think old video games are boring? Play Iskib, it is a Side view perspective game developed by COMPUTE! Publications, Inc. and released on DOS in 1989. You will then know that you were wrong.

Very rare platformer of unknown origin (rumored to be was the app to some computer magazine). The plot is also extremely conditional – an astronaut lands on a hostile planet and have to survive there.

The game consists of many levels and the gameplay is a typical platformer with side view, although there are some interesting features in the first place – the interface, which displays the distance that the hero left to overcome before the end of the level, and other things. These "other" things are, the available energy for jumping (the astronaut can jump in your suit, but each jump takes a lot of energy), the number of objects in the inventory (because the hero has the inventory and he can put find things) and the time that remains in order to use some found the bonus (there is the possibility of their use is time limited). Each successive level is larger than the previous one and contains more enemies.

Most likely, the game is still made by Amateurs, but nevertheless, not only the gameplay it is very entertaining, but also the graphics has been very high quality: the backgrounds are monotonous, but the figure of the hero and the enemies-monsters drawn great (and the monsters are quite varied), characters are even a shadow. In a word, technically - "another platformer", though not without "flavor", but it is a very interesting rarity, is worthy of a place in the collection of any fan of old arcade games.

Do you want to relive your memories and play Iskib online in your browser? Play it now for free.