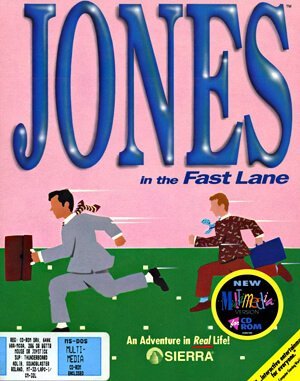 Jones in the Fast Lane

Click here to play Jones in the Fast Lane online
4.3 /5
The game world is represented by a board game-like ring of buildings in squares, resembling a cross between Monopoly and Careers. The game can be played by up to four players, who take turns "living" their respective weeks. If only one player is present, he or she may play against the titular "Jones".

Jones in the Fast Lane is a life simulation game developed and published by Sierra Entertainment in 1990. The objective of the game is to attain certain amounts of money, happiness, status, and education. The exact amounts needed are defined by the player(s) when the game begins. The game’s name and goals are a play on the concept of keeping up with the Joneses. Play Jones in the Fast Lane online!

Jones in the Fast Lane is a simulation of a person’s life, presented as a turn-based strategy game. You can play by yourself, or compete with other human players or the computer-controlled Jones. At the beginning of the game you determine what your goals are, in four categories – Money, Happiness, Education and Career: the higher your goals, the longer the game.

The game itself is presented as something akin to a board game. The board represents the city where you live. Each turn (here, a turn represents a week of your life) you have limited time to act, and you have to choose how to spend it. Walking somewhere else costs you time, as well as working, learning, and looking for a job.

The first thing you should do is looking for a job at an employment center. Since initially you have no education, experience or work history, you can only choose the simplest, lowest-paying jobs – such as a janitor or a cook. Later on, as you enroll into various courses at an university, you’ll get smart enough to get the high-ranking jobs. But remember that some jobs require you to buy and wear expensive clothes.

Work isn’t mandatory, and you can dedicate time to working whenever you feel like it. The money you get can be spent in many ways. You can buy a snack at a fast food restaurant (you should eat something each week, or next week you’ll have less time due to hunger). You can buy some appliances for your house, lottery tickets, newspapers and more. You can also store your money in the bank (a wise choice, considering the ubiquity of pickpockets) or invest into stock market. Remember that you have to pay rent for your house – if you don’t pay for a long time, your landlord will garnish some amount from the money you earn at work. But if you get enough cash, you can rent a luxury apartment and move out of the stinky hole inside which you’ve been spending your life earlier!

You can play Jones in the Fast Lane online here, in web browser for free!