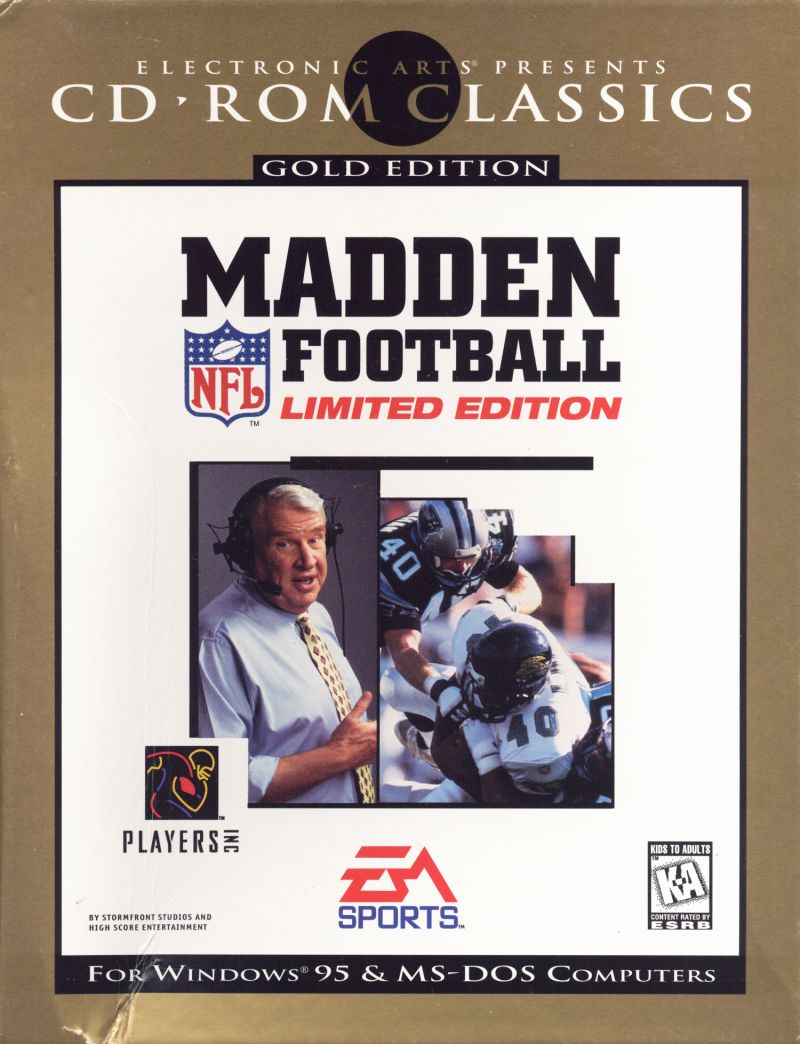 The Madden NFL series from Electronic Arts has tens of years of history. It all started in 1988 (for PC-players - in 1989), when he published the first part - something very simple in terms of gameplay, devoid of the managerial component, but with colorful graphics.Further, in 1991, was released John Madden Football II, in fact - advanced (mainly in terms of visuals) version of the previous. Alas, the PC version of both games was significantly inferior to not only the options from the Amiga, but even the console. This led to the fact that the sales of John Madden Football I-II on the main platform did not satisfy the corporate bosses, and they decided to hide a series on the periphery. And now five years later, in 1996, Stormfront Studios, with the support of High Score Entertainment is requested to return Madden NFL on PC.

Based on Madden NFL Football: Limited Edition lies released in 1995 platformers Madden NFL 96. The authors, High Score Entertainment, responsible for gameplay and artificial intelligence PC port, and Stormfront Studios, behind which by that time was three parts full of its own line of baseball simulators Tony La Russa Baseball, mostly graphics, the managerial component and voice acting, that is, that in the console versions was either absent or was in its infancy. It turned out a kind of karmic boomerang: if in 1989, John Madden Football, a DOS could not compete with the options for consoles, then seven years later the situation has changed diametrically opposite.

But let's finally talk about the game itself. To the delight of us given dozens of teams and more than five hundred players. We are free to spend as single matches to start the season, which will not only manage the team on the field, but also to the personnel management from the formation of the transfers, and , of course, to fight for trophies. Yes, this fine-tuning and detailed statistics, as in Tony La Russa Baseball 3, not here, she will appear only in the next part of the franchise, John Madden NFL 97 is released in 1996 the same year. Let's not forget that this is a port for which such quantitative and qualitative changes are already a success. For example and as a comparison, in the console version, the amount represented athletes were five times less, - to say nothing about the variability of the formation of convoys.

The matches themselves also inevitably transformed, and the most noticeable change is the graphics. 640x480 allowed to draw high-quality models of players, and different camera modes - plenty of them to admire. Although in fairness it should be noted that in the distant scale, the view from the commentary booth (to fans of American football felt by John, probably), the figures are too pixelated, making it look. But with close camera angles all the unfolding action not only looks, but plays great thanks to adapted management. The questions can be just a system of play in which you can only choose the direction and power, but not the type of submission or strike, making it not flexible enough compared to other thematic simulators of the time.

Speaking about the technical part of Madden NFL Football: Limited Edition, it is worth noting not only the appropriate age graphics, music and sound, but also a complete system of reviews, in sufficient detail to adequately and exhaustively describes what is happening on the field, but not limited to emotional exclamations in especially tense moments.

What conclusions from all this can we do oldgamer? Madden NFL Football: Limited Edition was the beginning of the return series on computers for a long eleven years, and then again there was a migration on the console. To thank fans of the electronic version of American football needs Stormfront Studios, which in collaboration with the original developers managed to perform a successful port, but also to create another two games in the series - John Madden NFL 97 Madden NFL 98 John.