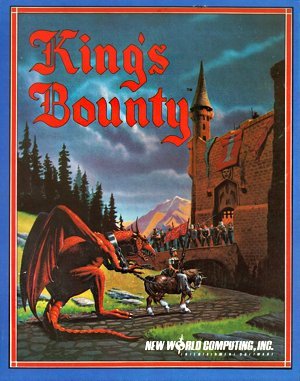 Click here to play King’s Bounty online
5.0 /5
King's Bounty is a strategy game by New World Computing best known for being the precursor to the Heroes of Might and Magic series.

As a knight, paladin, barbarian or sorceress, amass an army of creatures to take on the local baddies and search for the Sceptre of Order. A turn based game with a time limit that decreases depending on the skill level you play at. Play King’s Bounty online!

Depending on your allegiance, you will initially start with a different set of creatures, though the king will not mind whether you’re his knight or barbarian. Game consists of four maps, each with more mean creatures to control and meaner opponents to fight, but acquiring those maps early will let you find and buy some mean creatures that will help you easily conquer prior maps.

You can see all the enemies on the map and can literally clear the map of enemies, though random can appear in your castles if you leave them unprotected after the conquest. With each conquered castle (assuming the castle is occupied by the enemy you are currently after), you will get a level up, after first two level-ups king will promote you and you’ll be able to recruit cavalries from the castle, after four more promotions you’ll be able to recruit knights. All the other creatures are found outside the king’s castle and can be recruited no matter the level, although your level determines the quantity of creatures you can find for recruitment, but take care of your money because if you don’t have enough for your army’s salary, they will desert or turn against you.

There are also two artifacts per each map that will also uncover the map of the place holding the King’s Sceptre. The moment you find the sceptre and bring it back to the king, the game will end even if you happen to find it very early in the game.

As for tougher enemies, like the final one having hundreds of dragons and demons, they can also be defeated, but not by the army you can muster in one go. But when you’re defeated, you respawn back at the king’s castle and start with almost nothing but your money, however, the enemy in the castle will be left without those creatures lost in the battle, unless some of the new comes to aid him as every week the population increases.

You can play King’s Bounty online here, in web browser for free!