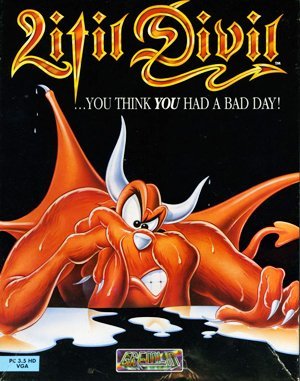 Click here to play Litil Divil online
5.0 /5
Players control a devil who must find his way out of a dungeon.

Litil Divil is an action video game released by Gremlin Interactive in 1993. The player takes control of a little red devil called Mutt who is trying to escape from a dungeon. The dungeon consists of a maze maneveured through from an over-the-shoulder perspective and rooms where Mutt is facing various riddles. Play Litil Divil online!

A little devil named Mutt is a rather lazy character who prefers to do nothing in his own cozy part of the underworld. However, his luck changes when he is chosen as the hero who must venture into a mysterious Labyrinth in the overworld and retrieve the Pizza of Plenty from there, so that his demonic friends will have enough capers and anchovies to eat.

Litil Divil has puzzle-solving and action elements, including platforming and combat. Mutt is being transported to various puzzle rooms, where he has to avoid obstacles, fight enemies, and manipulate the environment in order to succeed. It is also possible to buy items such as weapons and shields at specific locations.

You can play Litil Divil online here, in web browser for free!