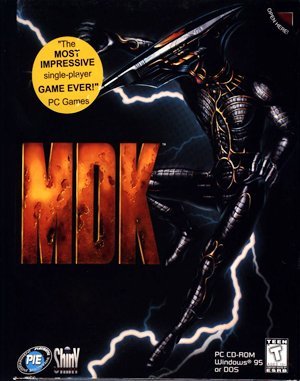 In this 3D shoot ’em up, you play Kurt, and your job is to save the world. Aliens have sent 8 giant fortresses to destroy earth. You run and jump through 6 missions of strange 3D worlds and kill the “Stream Riders” with your machine gun arm. Precise platform jumps are part of the challenge. Play MDK online!

Kurt is equipped with a special battle suit with an included parachute and a sniper interface (allowing you to aim precise shooting while standing still) embedded in your helmet. Further weaponry enhancements are available as you progress through the game.

MDK’s story is set in the form of a diary of an eccentric inventor, named Dr. Fluke Hawkins. Dr. Hawkins discovers something that he humorously calls “Flange Orbits,” but when he relates this to the scientific community, he is shunned and ridiculed.

Dr. Fluke Hawkins then goes out to build a space station, which he names ‘The Jim Dandy.’ He then bribes his laboratory janitor (Kurt Hectic) to join him by giving him some Hungarian goulash, and blasts himself into a self-imposed exile in outer space, swearing never to return until he “comes up with some really good stuff.” Upon entering orbit, he realizes that the “Flange Orbits” he theorized about didn’t actually exist. Rather than go back to Earth humiliated, he begins to work on a robotic dog that Dr. Hawkins calls “Bones” (the dog prefers ” Max”).

Dr. Hawkins continues work in harmony until he one day notices a strange phenomenon: long streams of some sort of energy are heading straight for the Earth. The Doctor sent down a warning (along with a basket of Max’s delicious oranges) but was promptly ignored. The streams proceeded to create massive hordes of enemies in “Minecrawlers,” giant fortress-cities designed to strip the mineral wealth (and potato crop, according to Dr. Hawkins) from the planet. The military forces of Earth were swiftly crushed by the alien invasion.

Dr. Hawkins decides to take immediate action. Pairing his new “Coil Suit”, a revolutionary, futuristic armor suit capable of repelling “bullets, bees, and small but very hard sticks” that holds a retractable/re-usable “ribbon chute” for parachuting and/or gliding. The suit also contains an arm-mounted chaingun that also serves as a head-mounted sniper rifle, Dr. Hawkins had the perfect weapons suit at his disposal but there was one problem. Kurt was the only one who could wear it, due to the Doctor’s age and Max’s extra pair of legs.

So Kurt, begrudgingly, was dispatched on “Mission: Deliver Kindness,” entering the Minecrawlers from above, and destroying them from the inside-out. He shot his way through to the “drivers,” typically killing them in some rather violent fashion. Kurt fought his way though all the Minecrawlers, destroying them one by one, until he eventually came to meet Gunter Glut, the hideous leader of the alien invasion.

Kurt destroyed the final Minecrawler but Glut managed to escape with Max in captivity, Kurt gives chase along a stream leading to the alien homeworld. In the end, Kurt frees Max and kills Glut, ending the game. The ending is a surreal, monochrome mix of a French pop music video and clips from MDK for no discernible reason.

You can play MDK online here, in web browser for free!