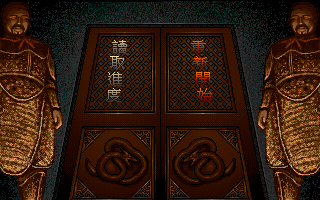 Prince of Evil, a top-notch Action game was developed by Softstar Entertainment Inc. in the year 1993. This was a very famous and in-demand DOS game. You can play it online here again.

Isometric fighting game from Taiwanese developer, one of the most well-known and available in the West, Chinese games (primarily because, even the game itself in Chinese, text in it, then there will be able to play each).

The action takes place in the conventional fantasy of the Medieval Chinese. Your hero – a wandering Prince, fighting with enemy bandits, ghosts and monsters (some of which came from the Chinese mythology). Of course, he can fight and sword in melee (there is, incidentally, different types of swords), but even winning over the average strength of the opponents you need to use different types of magical weapons: spells, fireballs, magic arrows, and so on. In the game there are separate screens for the inventory and spell selection.

Ammo of each kind of magic weapons is limited, therefore, require effective expense; in addition, the monster can instantly die from one type of weapon and be almost immune to another, so that such features also it is important to examine. As you progress through levels you will find more powerful spells that are useful in battles with dragons and various bosses. Also in the game there are different bonuses, which are also somehow connected with the Chinese myths: for example, to restore health is ginseng – "symbol of life".

One of the main advantages of the game is really amazing definition of drawing and the variety of bright palette graphics, not inferior to the best Western games of the early 1990s; the most pleasing are very large and the detailing of the figure of the protagonist and his various opponents. So pay attention to this mini-masterpiece Taiwan game making is all a fan of isometric battles.

Play your all-time favorite Prince of Evil free on your browser here.