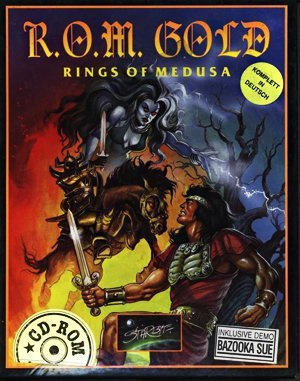 This is a remake of Rings of Medusa. Basically identical to the original in gameplay, the remake offers enhanced graphics, hardware supported sound and an improved interface.

The game centers around the quest of Prince Cirion of Morenor attempting to save the kingdom from an evil spell of the demonworld queen Medusa who has split his country and forced him into exile. Cirion must find five magic rings, scattered around the country, to summon the witch for a final showdown.

The rings can be found by conquering cities, digging for treasure and a sea fight. The player must gain enough money to finance a strong army. To achieve this, the protagonist Cirion trades with goods between towns, whereas he is subject to bandit attacks (scouts increase view range to enable avoiding them). On the map the player may also dig for treasures, conquer cities and install troops to defend that town, and later cross the large ocean and visit other islands.

Within the game, the player controls directly only the squadron that Cirion is with, the other troops use a defense plan chosen previously. When the player visits a city, a control screen appears, with options to sell and buy wares, gamble in the casino, gather information on temples and recruit troops.

You can play R.O.M. Gold: Rings of Medusa online here, in web brwoser for free!