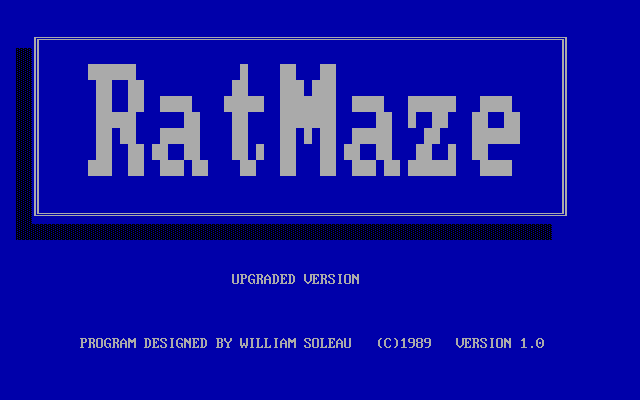 RatMaze is a Arcade game released by William Soleau in 1989. It is an interesting DOS game and a must play for all old videogame lovers.

A very simple dynamic game, which was created by the founder of Soleau Software.

The playing field is a maze through which to navigate the character (the ASCII symbol that looks like a smiley). The task of the character – to collect some stars scattered around the maze. At the same time on the playing field there is only one star as soon as it is matched somewhere you will see the following. To pass the level you must collect a certain number of stars. Collection interfere with rats that look like an X. After contact of the character with the rat lose one "life". Before each level shows the message stating the number of stars that must be collected to complete, and the number of opposing at this level the player rats. As you progress through the levels increases the game speed, there are more complex mazes, including changing during the passage level.

To RatMaze features include movement and character control. After you press-the"arrows" character starts movement in the specified direction and continues until, until you hit an obstacle or not a key is pressed, commands to move in the opposite direction. In addition to the above "inertia" of character has a "memory": if during the movement down arrow, change the direction 90 degrees, but will have nowhere to turn, the character will roll in the first during this direction of movement the passage leading in the right direction.

The ideas in this game, received no further development. In the case of an author like William Soleau, this is the exception rather than the rule. Many characteristics of his early games clearly distinguishable in later samples already created by Soleau Software. So RatMaze - along with several other early games (such as Missile Attack and the very first Race Car) is a bit separate milestone on the creative way the author.