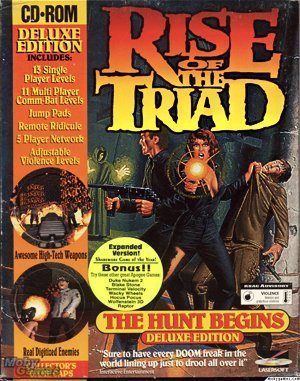 Rise of the Triad: The HUNT Begins

Click here to play Rise of the Triad: The HUNT Begins online
5.0 /5
You are part of an elite group of operatives called HUNT (High-risk United Nations Taskforce), and you must stop a maniac cult leader from killing millions of people. While scouting a remote island, you are suddenly surrounded by enemy troops with guns blaring. In the distance you see your boat - your only chance to escape - blown to matchsticks. In front of you is a huge fortress monastery, and your only chance to stop the madness.

Rise of the Triad: The HUNT Begins game description

As Taradino Cassatt, member of the High-risk United Nations Taskforce (HUNT), the player must infiltrate the stronghold that El Oscuro’s followers have established on a small island in the Gulf of Santa Catalina, and shut down their operations.

As the shareware episode was meant to showcase the various features of the full game, some of the enemies and obstacles encountered in The HUNT Begins actually only make their first appearance in episodes two and three of the Dark War. That way, the shareware version allows to sample a substantial portion of the game’s arsenal, enemy roster, items, traps and other obstacles.

The HUNT Begins contains a total of ten single-player levels (seven regular levels, one secret level and two “warp-only levels” which can be accessed only with the use of the level warp cheat), and additionally there are eight levels designed for online play. Three multi-player (Comm-Bat) modes are available in the shareware version: Normal, Score Mode, and Collector, and it is possible to play in these modes not only against the shareware version owners but also against opponents who have Dark War.

Play Rise of the Triad: The HUNT Begins online

You can play Rise of the Triad: The HUNT Begins online here, in web browser for free!