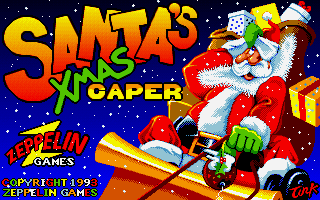 Do you want to relive your good old memories? Play Santa's Xmas Caper again, it’s a perfect DOS game launched in 1993 and a must-play for all video game lovers.

Arcade game with a Christmas theme with an unusual story: the elves – Santa's helpers – were offended at him for something and was poisoned (not to death). You in the role of his assistant to save the Christmas and to give every child in the world deserved a gift.

The game has only three large levels (Lapland, Ocean, City), each with different gameplay. In Lapland we are still in the house of Santa Claus and have to load the sleigh with gifts. The elves we be hindered by throwing us toy trains and tubes. From them, you can shoot snowballs, also need to collect special bonuses (figurines of Santa Claus and glasses), which will be needed later.

The second level flight in a sleigh over the Atlantic ocean. This level is the most incredible story: it turns out that in the world there is a team of mad scientists and villains who are convinced that Santa Claus is an evil alien from outer space, so they're after him in their flying machines and want to destroy the deadly rays. There is nothing you can do, just have to Dodge and collect bonuses.

Bonuses you will need at third level in the city in order to be able to climb into the chimneys and bring presents to the children. Here again, you will disturb the elves who are throwing boxes of presents and bombs. You also need to manage the drawn main reindeer Rudolph sleigh and Dodge attacks, you can attack and in response to the gifts from the sled, but then the kids will get them.

The game itself looks pretty weird. First and foremost, not even the graphics – the graphics here, though not the fountain, but quite reasonable - and the atmosphere: kind of game for a good holiday-themed, that's just no good here and does not smell (although this is debatable – it is, after all, we do good), however, the game is quite difficult and interesting. But still an Amateur.