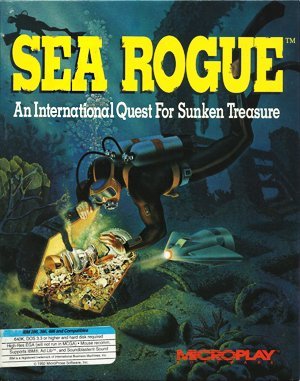 Click here to play Sea Rogue online
5.0 /5
You are in command of a crew that sail the Atlantic and Caribbean looking for wrecks. Pick up tips and maps from bars, libraries and researchers.

In Sea Rogue you assume command of a five person treasure hunting team that searches possible underwater sites for sunken treasure and artifacts. Sea Rogue allows the player to train the crew for different roles, for example divers that search the wreck while trying to stay out of the way of sharks, scientists that conduct research and examine historical artifacts and engineers that take care of the mechanical operation of your ship or submarine. Play Sea Rogue online!

Real-life shipwrecks are present in the game, including the Titanic. Of course, you have a rival for most of the game who is known as ‘Evil Eddy’ – the richest man in the world – and the goal of the game is to beat Eddy by becoming rich enough to purchase the ultimate submarine: the Sea Rogue.

With the help of your navigator, land on the right coordinates signified by the map (be careful though– some maps are fake). Send a few of your team members down, some with spearguns, some with metal detectors, and carefully map out the terrain according to levels of metal lurking beneath the muck, salvaging anything of value. A lot of research and attention to the actual methodology of wreck diving is evident here – each of the ships you find must be identified, and hundreds of real wrecks are included, each with accurate cargo manifest and background information. As you pull up encrusted swords and goblets from the Spanish fleet, you’ll return to port to sell your booty and acquire information for more wrecks that promise even greater rewards.

The goal of the game is, of course, to accumulate enough wealth to retire and live happily ever after. To do that, though, means you will need to hunt dozens (if not hundreds) of wrecks until you can afford the “Sea Rogue” the world’s most high-tech and expensive wreck hunting submarine. By the time you can afford the Sea Rogue, though, treasure hunting can get nasty, as your rival Eddy is out to rob you of your booty by whatever means necessary. Accordingly, the Sea Rogue comes equipped with torpedo tubes and other high-tech weaponry. Having the Sea Rogue also allows you to use deep-sea probes to explore more recent wrecks, e.g. freighters.

Here is your chance to find the world’s famous wrecks, such as the Lusitania, or that ultimate goal of all wreck hunters: the Titanic. Because wreck locations are randomized with every new game, Sea Rogue‘s replay value is high.

You can play Sea Rogue online here, in web browser for free!