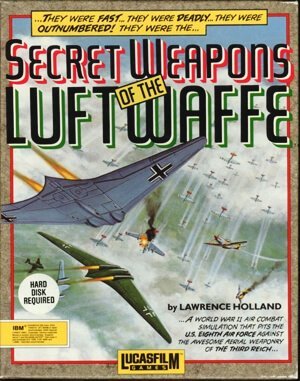 Secret Weapons of the Luftwaffe

Fly as an American or German pilot in the years 1943-1945 in this WWII air combat simulation. This game features several experimental German aircraft to try out. Can you alter the outcome of WWII with them? The experimental German planes include Messerschmitt 262, Me163 Komet rocket plane, and the Gotha “flying wing”. You can also fly the traditional ME109 or FW190 piston engine aircraft.

As for the American side, you can take to the skies in the P-51 Mustang, P-47 Thunderbolt, or the B-17 Flying Fortress bomber. In the B-17, you can not only control the plane itself, but also the gun turrets and the bombing sight.

Next to training missions for each aircraft, there are several historical missions available, recreating real air encounters of the war.

The Tour of Duty mode allows you to take your pilot through a set number of missions, gaining promotions and medals, with the ultimate goal of surviving the tour.

Finally, there’s the strategic campaign mode where you can fight the whole war from either side, both planning and flying missions. As the Americans, the objective is to cripple Germany’s industry through strategic bombardment. As the Germans, you have to survive by keeping the industry alive. As time passes, new aircraft become available, in accordance with history. For instance, the Mustang was not deployed until late 1943. For the German side, the jet and rocket aircraft have to be researched before they can be built. The German side can also build V1 and V2 missiles. Another option is to let industrial branches work in secret to hinder the American bombing efforts.

Other interesting features are a mission editor and a film playback option.

You can play Secret Weapons of the Luftwaffe online here, in web browser for free!