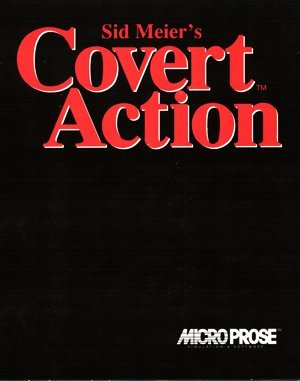 Covert Action is best described as a secret agent simulator, with a heavy dose of puzzle and some top-down shooter action. You’ll follow the hints all over the world, surveil suspect safehouses, apply wiretaps (which is a puzzle sequence), even go inside and check each and every drawer without arousing suspicion (by keeping very quiet). Play Sid Meier’s Covert Action online!

If you’re discovered, you’ll need to avoid car chases or you’ll end up shooting it out with the bad guys. You can also “tail” a suspect (with multiple cars) and see if you can find another safehouse or more headquarters to search for clues. You have a silenced pistol (or Uzi) and three different types of grenades, plus other high-tech toys. As you get closer to the mastermind, the plot gets more intricate, timeline gets shorter, code breaking is tougher, and enemies harder to take out.

As special agent Maximilian (or Maxine) “Max” Remington, you are the premier anti-terror agent in the world. CIA have received tips and clues about some suspicious activities of some known bad guys. Gather enough evidence through house search, wiretaps, etc. Decode any messages you discover to unravel additional clues. Each operation will be handled by multiple people. Figure out the crime before it happens and get enough evidence to find the true mastermind behind the whole thing. Then chase down and arrest the suspects via car chases or go into the house arrest the suspect yourself. Can you arrest all the masterminds?

The game splits itself into missions, where we have to capture a mastermind. In order to catch him/her though, the player must play through some mini-games to find clues on the mastermind’s whereabouts.

This mode, the primary attraction for the game, is played top down, and the player has to disable any guard and cameras that come in his way with the tools chosen before entering, clearing the map towards the goal. There are many things that can be done once inside the facility, like putting bugs on the phones, photographing incriminating evidence, or capturing the suspected mastermind.

If the character loses consciousness while inside the facility, the player is faced with a conumdrum: lose some time that could be used to find the mastermind, or agree to a prisoner exchange with that faction.

This mini-game is played inside the CIA building. The player is given a scrambled message and key letters used to decipher it. The message must be deciphered before the clock runs out.

In this mode the player must follow the suspect’s car to a new location and use simple diversion methods to not be caught. This mini-game is played top-down and the cars are represented by small dots.

Both these spying methods involved playing the same mini-game. The player must solve a circuit board in a pipes kind-of game, where the current flow must reach its destination without sounding any alarms.