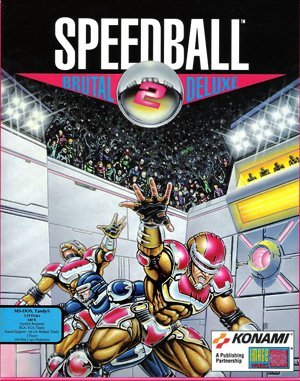 Speedball 2: Brutal Deluxe is a 1990 video game based on a violent futuristic cyberpunk sport that draws on elements of handball and ice hockey, and rewards violent play as well as goals. The original game was developed by Bitmap Brothers, with various remakes for many platforms since being published. It is a sequel to the 1988 game Speedball. Play Speedball 2: Brutal Deluxe online!

Brutal Deluxe doesn’t live up to their name – in fact they’re the worst team Speedball has ever seen. As their manager, it is your job to transform their fortunes. As well as the league system, which consists of 2 8-team divisions and challenges you to advance to the top, there are also 2 cup tournaments, one of which is played out over 2 ‘legs’ with the aggregate score deciding who progresses.

You can play the matches as well, which is the real meat of the game. They consist of 2 90-second periods, and the gameplay is futuristic, fast and frantic, with heavy tackling encouraged to retrieve the ball. Power-ups and tokens appear on the pitch, including ones to make your players extra-tough or freeze the opponents.

The sides of the pitch each include a score multiplier, which you can run the ball through to increase the value of your scoring – the opposition can sometimes immediately grab the ball and nullify this. There are also 5 stars which are worth 2 points each if you hit them (more if you have the multiplier activated), but these can also be cancelled out by the opposition hitting the same star, and their points values only become set after the half. Next to the stars there are ‘portals’ which throw the ball out the opposite side of the pitch, in the direction it was going.

You get money for the results, and by collecting the silver tokens which appear on the pitch at random intervals. Between each match you can spend these either on improving your existing players as far as they can go, or on buying better ones and fitting them into the team. Your original players can only be improved to a certain extent, so remembering where your signed players are and making use of them is important.

A variety of tokens also appear during the match, some of which boost your team’s power for a short period of time, and one freezes the opposition.

You can play Speedball 2: Brutal Deluxe online here, in web browser for free!