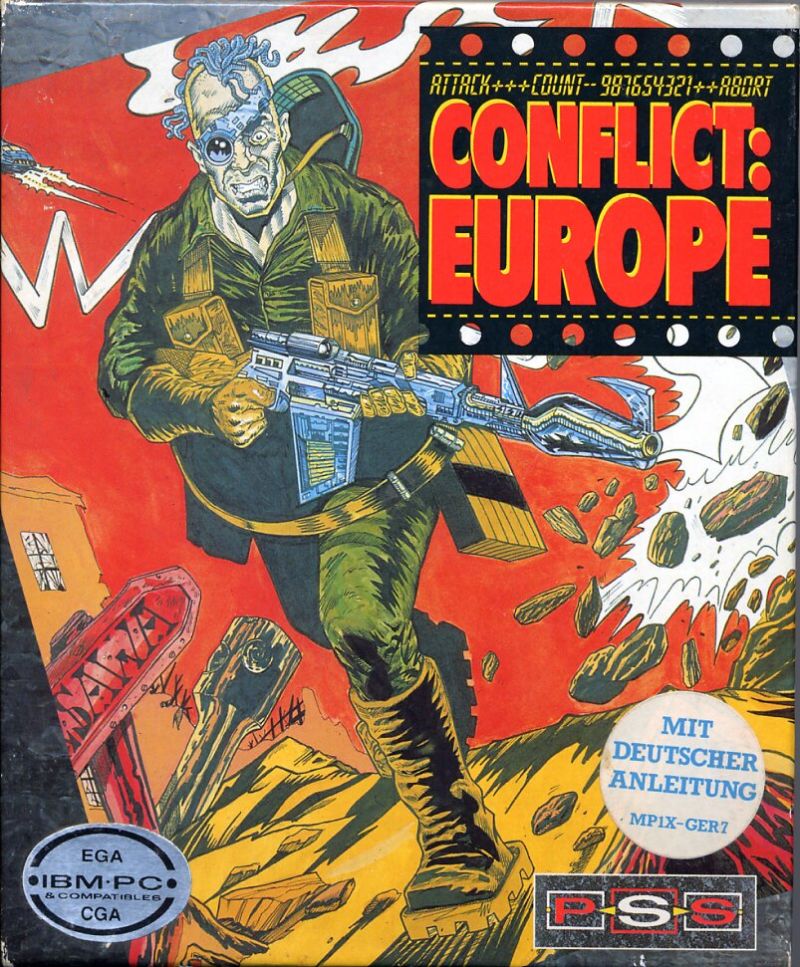 A Simulation game, Conflict: Europe was released in 1989 by the famous developed Mirror Image. It is a DOS game and is perfect for all video game lovers.

So... Dream came true, the miracle happened, the fight is over. Conflict: Europe – on old-games.ru. What once seemed impossible a few months it was implemented. And start description of game need with this. This thing is by no means the first place in the list of least known DOS games. For its rarity as such, it is at least in second place. Still, Conflict: Europe is the MAIN decoration of our website, the MOST unique and dear to the hearts of the instance of all the thousands of games that it was, is and will be. Search and re-creation (Yes, actually – it re-creation) this game forever left his mark in our history, and even after years and years when it will spread on the Internet, to us her name will always represent a special value and a special delight for the ears: after all, on our website you could first find it, and if not for the work of many people, the game never returned to the people. No kidding. Without pathos. However, all this has been said elsewhere, so you should now go directly to the game.

Conflict: Europe is a turn-based wargame from the acclaimed series (this is actually a development of the ideas of much older games not released on PC under the name Theatre of Europe), modeling possible Third world war if she suddenly started at the turn of the 80s-90s, in a world where the USSR and the Warsaw Pact have not broken up, and Germany never United. You can play for both sides, although each has small features (countries of the Eastern Bloc attack first and have a certain strategic advantage and significant superiority in manpower and technology [but it is quantitative]); the goal, of course, is to defeat the enemy. The initial scene – West Germany. Despite the fact that the game has and can be applied to nuclear and chemical weapons (or rather, it will be necessary to apply), the basic rate is made on "regular" armed forces, so this game is the simulator of the Third world, and not only nuclear war.

The game screen is, apparently, the General staff of the NATO command or OVD, and most of it is a giant monitor with a map of Europe on which you keep track of the main events of the game and the results of your and the enemy's actions and decisions. Below is the basis of the game interface – a lot of small little screens, each of which has some specific function, whether it is information about radiation contamination of soil, diplomacy and the dynamics of the population. Since the game is quite difficult, it would be right if every interface element will be discussed separately and in detail.

So, at the beginning of the game your troops (regardless of party) are on the territory of Germany, directly opposite the enemy and is immediately ready to execute commands. Management in the game by using the mouse, and specific order is a click on one of the many people most small monitors, the majority of which is responsible for military orders. So, can I immediately order a nuclear or chemical attack, can be an air strike, to order ground connections to advance or retreat, and you can just see General information about the situation or even just try to join with the enemy in negotiations. When you click on a particular monitor is a separate screen, which are available in this mode option.

The most important monitor is, of course, monitor No. 3, the mode of launching nuclear missiles. Just not to get there – first you need to enter special access codes (that is, in the game manual). After a successful login will have a choice of actions: either accidental kick or blow to a specific purpose (city, group of forces). In the second case it is necessary to choose not only the goal, but a specific "type" of shot (they differ in the number of active and potential missile damage, and each such "type" correspond to various "funny" names). Monitor called Special Orders devoted to managing less terrible, but still not falling under the concept of "military leadership" works: here you manage your chemical weapons, satellites in earth orbit and wisedome spetsnaz units (which can be used, say, for the destruction of enemy railroads to deprive the enemy of resources supplies and reinforcements). The following monitor – manage your force. Here you can give its combat aircraft a particular order: for example, to attack a particular enemy target, and choose strategic bombing (very massive attack, requiring a large number of planes in which the inevitable huge civilian casualties) or "deep impact" (the bombing of the main headquarters of the enemy).

But, of course, not the whole gameplay is based on military actions, so a number of monitors devoted to other cases. For example, the monitor of diplomatic relations, through which you can negotiate with enemies, to offer or to request for an armistice or additional threats. Interesting point – if you hit (accidentally) by neutral Switzerland, it will get very tragicomic message...Also on these screens, you can view information of the arrival of the front reinforcements and additional resources. Other similar monitors – the control over the radiation situation (for a long stay in the radiation area leads to heavy losses in manpower and equipment, not to mention the losses among the civilian population) and common information the monitor, which reports on the situation on the fronts, and committed action issued in the form of a notebook.

However, the main action, of course, takes place on the largest screen – the map of Europe, split this time all the same cells-hexa, but invisible to the player (so at what distance will move the troops (mainly consisting of tanks and aircraft) in one move (a move in the game is two days), to say not so easy, plus – much depends on the landscape; roughly, if the terrain is not mountainous, over the course of the army passes a small conventional square). The control of the forces is very simple: you need only select the icon with a particular OU by using the mouse cursor and using it to point out to him the direction of movement or an action. Attack – the same thing (but the attack can only be not moving now division): select the unit, then target that needs to be in the sector, falling within the range of the chosen squad. The same goal can be elected to attack an arbitrarily large number of your units, the main thing is to let the radius. The role of reinforcements in the game are also important: if not for the unit, which suffered losses, then this unit will simply cease to exist. After each battle comes a detailed report about its results, where it is noted how much technology has been lost, damaged and so on. Similar stats, only much larger, it will be in the end of the game.

As is known, to appreciate the graphics in wargames – a thankless task. However, in case of Conflict: Europe in any case we cannot be silent about that subgenre, she is just gorgeous. Of course, all the troops presented exclusively in the form of symbols on the map, but this map is depicted just extremely accurate and beautiful. The same can be said about all the many listed above, subsidiary screens also feature "taste"; in addition, in the game, oddly enough, there are various hand-drawn inserts illustrating some of the highlights of what is happening: for example, the nuclear "fungus" above the city, which was hit by a rocket, or newspaper clippings, briefly telling about current events.

The verdict can be fit in one word: amazing. It's really just an excellent war-game, which although was not a revolution in its direction, but has absorbed almost all the best features of its predecessors and showed a great example of balancing difficulty (because the AI opponent is very advanced!), fun and "playability" (including in terms of interface). And if you remember all the epic which had to go through in order for the game still BECAME available to everyone, it becomes quite clear why Conflict: Europe gets a more than deserved the highest score possible.

Enjoy playing Conflict: Europe online, it can be played on your browser and is free.